Elle Duncan is a television host, writer. She started #GirlDad trend giving an emotional, heartwarming tribute after the Kobe Bryant helicopter crash. Elle is married since 2016 and has one daughter. 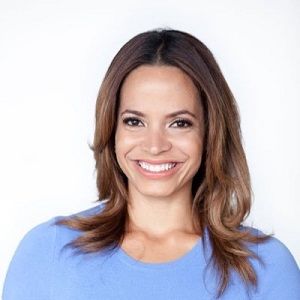 There’s absolutely nothing like the love between sisters! It’s like my soul split in half and landed in another person- I love her so much, I miss her every day but I’m so grateful for the time we get and more importantly for the time my daughter gets with a better version of her mom!

Elle Duncan is married in 2016 to Omar Abdul Ali. The couple tied the knot in Costa Rica. They met for the first time at a night club party. They were introduced by Omar’s DJ friend.

On 25th July 2018, Elle and Omar had their first baby. They had a daughter, Eva weighing six pounds and 10 ounces and 19 inches at the time of birth.

She revealed that it was not an easy delivery as she had a labor for 32 hours!

Who is Elle Duncan?

Georgia-born Elle Duncan is a professional news anchor. She is also a host, reporter, actress, writer, and Television Personality since 2003.

Presently, she is a prominent media figure among the fans as the sports anchor for ESPN. Furthermore, she is also famous for working as the Atlanta Hawks sideline reporter.

Elle Duncan was born Lauren Elle Duncan in 1983 in Atlanta, Georgia to Scottish and Irish descent.

Her mother’s name is Clark and her father’s name is Toni Duncan. She has a sister, Kelli Duncan whom she is very close to and calls her best friend. Kelli is a firefighter.

She graduated from the State University of West Georgia. It’s a Public University in Carrollton, Georgia.

Elle initiated her career in her hometown and hosted a sports talk show. She served as an intern in “2 live Stews”. Afterward, in 2004, she started working for Ryan Cameron Show.

As an actor, she was also starred as a reporter in the film, “Ride Along”.

Currently, she works as an anchor for ESPN’s show, SportsCenter.

Elle’s net worth is estimated to be $1 million and her income is around $500 thousand per annum.

She was arrested in 2013, for reckless driving.

Elle Duncan is a brunette with dark eyes. She stands 5 feet tall and weighs 56 kg.

Elle Duncan turned her loving boyfriend into husband. Let’s know about her relationships