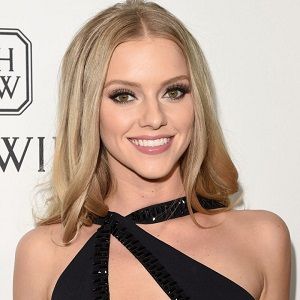 Elle Evans is a married woman. She has exchanged vows with Matt Bellamy on 10 Aug 2019.

They got engaged in December 2017. The pair have been dating since 2015 and finally engaged after two years. Elle’s fiance Matt was previously engaged with Kate Hudson and also has one son.

Previously, Elle was also in a relationship with Canadian electro music producer and performer Deadmau5 in 2010. Although, the couple couldn’t carry their relationship and broke up after one year in 2011.

Who is Elle Evans?

Elle Evans is an American model and actress. She rose to prominence after appearing in the music video for Robin Thicke and Pharrell Williams’s Blurred Lines.

Furthermore, she is also the face of NYX Cosmetics followed by other several brands. Back in 2009, she also became the Playboy Playmate of the Month in October.

In addition, she has also appeared in the film Scouts Guide to the Zombie Apocalypse as well as in the horror-thriller film The Love Witch.

Elle was born on December 9, 1989, in Paris, Texas, United States. She grew up in Blanchard, Louisiana along with her parents.

At the age of 19, she also became Miss Louisiana Teen USA in 2008 and was third runner-up in the Miss Teen USA 2008 pageant.

Talking about her nationality, she is American and her ethnicity is mixed. Moving towards her education, there is not any information regarding her educational background and parents.

Elle Evans began her modeling career at the age of 19 when she became Playboy Playmate of the Month for October 2009. Back in 2010, she appeared in her first commercial in MMG. Later, she shot for Wilhelmina Models and Elite Model Management in Miami, Florida.

Furthermore, she also appeared in Robin Thicke‘s music video along with Emily Ratajkowski and Jessi M’Bengue. for his single Blurred Lines featuring Pharrell Williams. Soon after that, she again featured in two of Beyoncé’s music videos, Haunted and Superpower.

In the same year, the famous model has also appeared in the film Scouts Guide to the Zombie Apocalypse as well as in the horror-thriller film The Love Witch.

Being a successful model, Elle earns a decent amount of money from her profession. Although, her net worth is unknown.

As of now, she has not won any awards in her career. However, she was Miss Louisiana Teen USA in 2008 and was also third runner-up in the Miss Teen USA 2008 pageant.

So far, there are not any drastic rumors regarding her personal and professional life. Moreover, Elle had faced controversy when she was arrested in a restaurant after marijuana was found in her purse.

Elle Evans has a height of 5 ft 9 inches and weighs 57 kg. Furthermore, she has a pair of attractive hazel eyes and blonde hair.