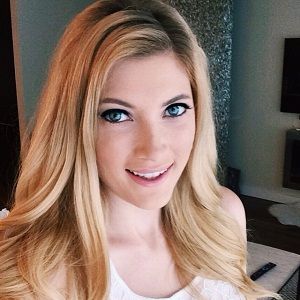 Elle Fowler is a married woman. She tied the knot with her longtime boyfriend Alex Goot on June 19, 2016. They began dating back in 2014 and continued their love life and finally got engaged on July 3, 2015.

Later on June 19, 2016, they exchanged their vows at the Bacara Resort in Santa Barbara, California. Back on December 21, 2017, they announced that they are expecting their first child in June 2018.

Now they have a son named James Alexander Goot.

Since their marriage, they have maintained a perfect relation between them and never involved in any disputes.

Talking about her past relationship, she has never been spotted with any man and never involved in any affairs. Currently, Elle and Alex are enjoying their married life and living elegantly.

Who is Elle Fowler?

Elle Fowler is a widely famous American YouTube star. She became extremely popular for her beauty and fashion videos on her YouTube channel ‘Elle Fowler’.

Elle was born on May 25, 1988, in Augusta, Georgia, United States. Talking about her nationality, she is American and her ethnicity is English-Turkish.

She is the daughter of physician Dr. Scott Fowler and Melisa Fowler. Furthermore, she has two younger sisters Blaire Fowler and Emily Fowler.

As a child, she developed her interest in fashion and makeup and also began to learn from a very early age. Moving towards her education, she attended Miami University.

Elle Fowler began her career as a YouTuber back on July 9, 2008, when she first created her channel. Since then, she has been posting various makeup and fashion tips on her channel.

She came into the spotlight for her beauty and fashion videos on her YouTube channel named ‘Elle Fowler‘.

Currently, her channel has amassed over 1.2 million subscribers and more than 184 million views. Furthermore, he is also an Instagram star with more than 285k followers and almost 280 followers on Twitter. Besides YouTube, Blair and Elle also released a novel named Beneath the Glitter followed by another Where Beauty Lies on August 13, 2013.

Additionally, this famous YouTuber has also featured in a couple of hit fashion and style magazines, including Seventeen and Marie Claire. Moreover, she has also photoshoot for Glamour.

Furthermore, Elle has also collaborated with Fleur DeForce in a video titled “Truth or Dare?!? with FleurdeForce and TalkBeckyTalk.”

As a YouTuber, many of her videos have earned millions of views. Some of her most viewed videos are My Makeup Collection and Storage, How I permanently got rid of my acne, Basic Makeup for Beginners using Coastal Scents 88, Bedroom Tour, and Get Ready With Me. In addition, she also started an online planner sticker shop named “Glam Planner.”

Being a famous YouTuber, she pockets a handsome amount of money from her profession. However, her net worth and salary are unknown.

As of now, she has not won any awards in her career. Although, Blair and Elle have been nominated for Teen Choice Awards in the “Web Star” category for 2011 and 2012.

So far, there are not any drastic rumors regarding her personal and professional life. Once, Blair and Elle dragged into a controversy as they released three sample perfumes and also made one of them a full-size perfume.

However, their customer later the followers criticized their product saying they were not full-size fragrance, and that they can get a refund.

Elle Fowler has a height of 5 feet 8 inches and her weight is unknown. Moreover, she has a pair of beautiful blue eyes and has blonde hair.