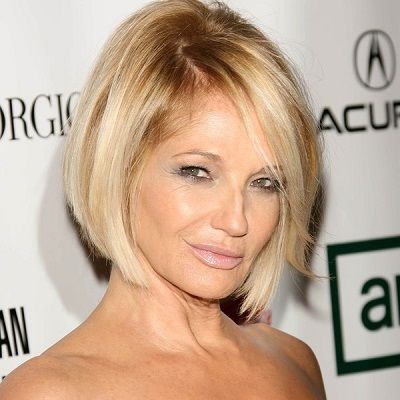 No more bare bodies in film scenes for me. For my children's sake, I must stop. The other kids at school keep throwing it up to my children, and they are not kind.

A successful marriage isn't necessarily one that lasts until you're dead.

It's difficult to get into trouble if you don't take yourself too seriously.

What is the relationship of Ellen Barkin?

Ellen Barkin was married twice in her life. She was married to Gabriel Byrne at first. He is an actor and writer by profession. They met each other on Siesta set and married in 1988. Similarly, they have two children, Jack Daniel, and Romy Marion Byrne. But they divorced in the year 1999.

After that, she married Ronald O. Perelman in the year 2000. But they divorced in the year 2006. She received $40 million from him as alimony. She is currently in a relationship with Ben Emmerson who is a British lawyer. Furthermore, US Magazine mentioned that she is engaged already.

Who is Ellen Barkin?

Ellen Barkin is an American actress and producer. She is famous for her breakthrough role in the 1982 film Diner. Similarly, she had starred in films such as Tender Mercies(1983), The Adventures of Buckaroo Banzai Across the 8th Dimension (1984), The Big Easy (1987), Johnny Handsome and Sea of Love(both 1989).

She was born on 16th April 1954 in The Bronx, New York, U.S. She is the daughter of Evelyn and Sol Barkin. Her mother was a hospital administrator who worked at Jamaica Hospital and her father is a chemical salesman. Similarly, she has a brother George Barkin.

Similarly, her nationality is American and her ethnicity is Ashkenazi Jewish.

Talking about her education, she attended Parsons Junior High School. She attended Manhattan’s High School of Performing Arts for her high school diploma. After that, she attended Hunter College and double majored in history and drama.

Talking about her career, her breakthrough role was in the 1982 film Diner. Similarly, in the following year, she had starring roles in films such as Tender Mercies(1983), The Adventures of Buckaroo Banzai Across the 8th Dimension (1984), The Big Easy (1987), Johnny Handsome and Sea of Love(both 1989).

Likewise, her producing credits include the films Letters to Juliet, Shit Year (both 2010), and Another Happy Day (2011).

She has been nominated to many awards. She won Primetime Emmy Awards for Outstanding Lead Actress in a Miniseries or a Movie for Before Women Had Wings in the year 1998. Similarly, she won Blockbuster Entertainment Awards for Favorite Supporting Actress-Adventure/Drama in The Fan.

Similarly, she won Best Foreign Actress for The Big Easy and Desert Bloom in the year 1988. Similarly, in 1998, she won Satellite Awards for Best Actress in a Supporting Role in a Miniseries or a Motion Picture Made for Television.

The estimated net worth of Ellen Barkin is around $80 million as of 2022. She might earn a huge amount of money from her career. But she has not disclosed her salary and incomes.

Rumors were that Ellen has dated her Wild Bill co-star, David Arquette. Later, in an interview with People, David admitted that they had an affair.

Talking about her body measurements, she has a height of 5 feet 6 inches and her weight is around 64 kg. Similarly, her hair color is blonde and she has blue color eyes.