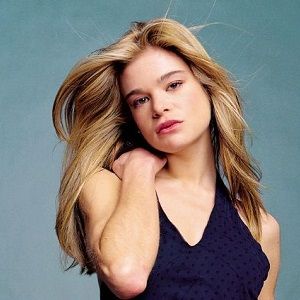 I feel most comfortable playing and creating characters who are least like myself.

Ever since I was a little kid, whenever my parents would have company over, I would put on shows, whether they would be magic shows, singing shows, dancing shows, little skits.

Ellen Muth likes to keep her personal life off the radar of the media. Consequently, she has chosen to distinct her private and professional life. Her work life is covered by the media all the time. But her private life is kept a secret.

Therefore, any details regarding her relationship status including her love affairs and dating life are not known yet. Ellen’s personal life is in the interest of lots of her admirers. But as of now, we can only wait until she decided to share these details. As of now, she is possibly single.

But in the past in 2004, she was in a relationship with Jeffrey Donovan for a short period of time. Jeffrey is a famous American actor.

Who is Ellen Muth?

Connecticut-born Ellen Muth is a Film and TV actress. Ellen Muth has American citizenship. The beautiful and talented Ellen Muth is an eminent personality in the acting industry. Presently, she is a prominent figure among the fans for appearing in the American comedy-drama show, “Dead Like Me.” She portrayed the lead role of Georgia “George” Lass in it from 2003 to 2004.

Similarly, she is also famous for starring in the TV series, “The Truth About Jane,” and the film, “The Young Girl and the Monsoon.”

Ellen Muth was born on March 6, 1981, as Ellen Anna Muth. The name of her birthplace is Milford, which is in the state of Connecticut in the United States. Her father’s name is Erick Muth.

Discussing her education, she attended ‘Skip Barber Racing School.’ And for her acting career, she studied at ‘Lee Strasberg Theatre and Film Institute.’

Ellen Muth is active in this acting field since 1995. Initially, she tried her luck in modeling too. But as per her acting career, she made her debut in a film. The name of the movie is “Dolores Claiborne.” She played the role of ‘Young Selena St. George’ in it.

She gained significant fame and success in 2003 after joining the cast of the TV show, “Dead Like Me.” From 2003 to 2004, she played the lead role of ‘Georgia George Lass’ in the show. Later in 2009, she reprised the role of Georgia Lass in the film, “Dead Like Me: Life After Death.” She earned nominations for the ‘Saturn Award and ‘Satellite Award for her performance in it.

Presently, she is a prominent figure in the industry. This helps her to earn a huge amount of income from her salary and her other social media.

Subsequently, this has added to her a pretty good amount of net worth. It is estimated at around $ 3 million.

Ellen Muth is a girl with a vibrant personality. She keeps herself off the media tittle-tattle. As of now, there are no rumors regarding her personal and professional life. Similarly, her avoidance of trash-talking in public keeps her away from any controversies and criticisms.

Muth has a height of 5 feet 3 inches (1.6 m). Similarly, she has an incredible body of 35-24-34 inches. Also, her breast size is 32C. Several websites suggest her body weight as 51 kg. She has blonde hair and has light brown eyes.

Ellen Muth is a passive social media user. She only uses Twitter to reach her fans. As of now, more than 8.4k people have followed her on Twitter.

Tags : Actress Dead Like Me Dolores Claiborne The Truth About Jane The Young and the Monsoon