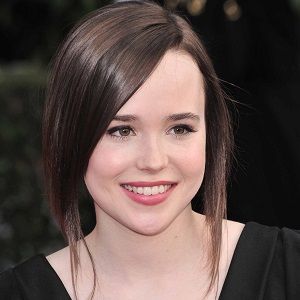 Love, the beauty of it, the joy of it and yes, even the pain of it, is the most incredible gift to give and to receive as a human being. And we deserve to experience love fully, equally, without shame and without compromise.

You think you're in a place where you're all 'I'm thrilled to be gay, I have no issues about being gay anymore, I don't feel shame about being gay,' but you actually do. You're just not fully aware of it. I think I still felt scared about people knowing. I felt awkward around gay people

I felt guilty for not being myself.

This world would be a whole lot better if we just made an effort to be less horrible to one another.

This world would be a whole lot better if we just made an effort to be less horrible to one another. If we took just five minutes to recognize each other's beauty instead of attacking each other for our differences - that's not hard - it's really an easier and better way to live.

What is the relationship of Ellen Page?

Elliot Page was dating Emma Portner who was a dancer in July 2017. Before it, they recorded Britney Spears‘ Lucky together.

And they married secretly on 03 Jan 2018 a private ceremony. The couple announced their marriage via Instagram by posting a picture of their matching wedding rings.

After three years of marriage, Elliot has filed for a divorce.

Grace was once rumored to be dating Ben Foster and Emile Hirsch. However, they did not confirm their relationship.

Before this, he was in a relationship with Samantha Thomas who is an artist. The pair dated for a year and separated afterward. Likewise, from 2008 to 2009 she was dating Mark Rendall.

Emile Hirsch and Page were also rumored to be dating when they work together. In 2011. he was romantically linked with Clea DuVall. From 2012 to 2013, he has a relationship with Alexander Skarsgard.

Who is Elliot Page?

Elliot Page is one of the popular Canadian actors. He is most popular for his performance in the movie like, ‘Hard Candy,’ and also win our hearts as a pregnant teen in ‘Juno.’ He follows a vegan lifestyle.

Moreover, he was also named as one of the Sexiest Vegetarians of 2014. At a human rights campaign in Las Vegas on February 14, 2014, Page revealed his homosexuality and came out as a lesbian.

Four years later, he married a dancer, Emma Portner. Grace is a spokesperson for ‘’Cisco System” and also appeared in various advertisements for it.

Elliot was born in Halifax, Nova Scotia, on February 21, 1987. His mother’s name is Martha Philpotts who was a teacher by profession. Likewise, his father’s name is Dennis Page who is a graphic designer.

His birth name is Elliot Grace Philpotts-Page and has a mixed ethnicity of English, Scottish, Irish, and Some Welsh.

Elliot starts his career at a young age when he was just ten yrs old. He appeared in the television movie ‘Pit Pony’ in 1997. There he played the recurring role of ‘Maggie Maclean’.

The same year, he also appeared in the movie ‘Marion Bridge’ as ‘Joanie’.

Until grade 10, he studied at Halifax Grammar School for up to 10 classes and went to Queen Elizabeth High School for further study. In 2005, he graduated from Shambhala School in Halifax, Nova Scotia.

He studied in Toronto to study Interact Program at Vaughan Road Academy for two years. Page attend that academy with actor Mark Rendall.

Elliot Page had appeared in the movie from his young age. And in 2005, he appeared in a drama film titled ‘Mouth to Mouth’ as ‘Sherry’. He was praised by all for the role. The same year he appeared as ‘Hayley Stark’ in the thriller film ‘Hard Candy’.

He played the character of a fourteen-year-old girl who traps and tortures a man whom he believes to be a sexual predator. Page was an outstanding performance and was called “one of the most disturbing yet bold and a complex performance”.

In 2006, he appeared in one of the superhero film ‘X-Men: The Last Stand’ as ‘Kitty Pryde / Shadowcat’. Eight years later, he would reprise the character in ‘X-Men: Days of Future Past’. In 2007, he appeared in a comedy-drama independent movie playing Juno. It was the role that changed his stature as an actress.

Then he got various big projects to work on. He portrayed as ‘Juno MacGuffin. It was able to earn various awards. It also was nominated at the 80th Academy Awards in the Best Actress category.

In 2007, he was seen playing the character of the unfortunate 16-year-old ‘Sylvia Likens’. The character was brutally tortured for over three months and later killed by Gertrude Baniszewski in the film ‘An American Crime’.

The film was based on a true story and Page was lauded for his portrayal of Likens. Moreover, he appeared in various films like ‘Smart People’, and ‘The Stone Angel’. In one of the sports comedy-drama films ‘Whip It’ in 2009 he appears in the role of Bliss Cavendar.

Elliot also gets the chance to perform alongside Marion Cotillard, Leonardo DiCaprio, and Joseph Gordon-Levitt in one of Christopher Nolan’s directorial venture ‘Inception’ in 2010. He also had a significant part in the thriller sci-fi movie.

After his performance in that movie, Woody Allen was impressed by his performance that he was picked for his directorial venture ‘To Rome with Love’. The movie also starred various renowned personalities like Alec Baldwin, Penelope Cruz, Roberto Benigni, and Jesse Eisenberg.

Later he played ‘Monica’ in the film which was based on four separate storylines. In the following years, he appeared in films like ‘The East’, ‘Into the Forest’, ‘Tallulah’. His roles in movies ‘Flatliners’, ‘My Days of Mercy’ is also outstanding. Moreover, he also provided his voice to the 2013 video game ‘Beyond Two Souls’.

He has received various awards for his performance in the movie, “Juno”.

He is one of the renowned actresses and must have good earnings. His net worth is $14 million. Most of the movies have made a good collection at the box office.

Grace now owns a house in Hollywood Hills Home which he bought from Venus Williams for $1.7 million. He also has a Ferrari worth $256,550.

Page was once rumored to be dating Ben Foster and Emile Hirsch. However, they did not confirm their relationship. Moreover, in 2008, Elliot had pre-Oscar breakfast with actor Frankie Muniz and thus sparked rumors of their dating together.