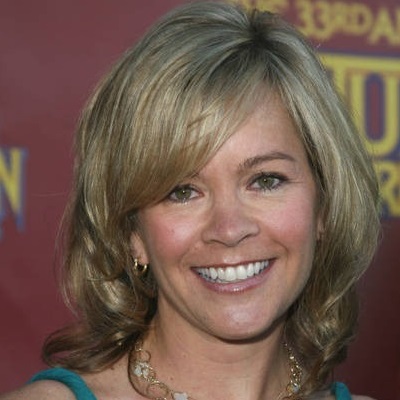 ''Acting was something I knew I wanted to do even before I started kindergarten. It just kept being a reoccurring theme throughout my school years

it became part of my personal identity. I was never, however, a musical comedy gal. I remember being in a one-person show in grade school called "The Last Flower" about being the last living thing on Earth

it felt so cutting edge at the time and was such a privilege to do something so enjoyable and seemingly edgy!''

''Donald was a consummate pro, soft-spoken with a wonderful, quiet sense of humor, which you need during night shoots!''

''Obviously, what I took away from the Halloween experience was under Dwight H. Little's direction. I still get a kick of Rachel running through her yard in Halloween 5 wrapped in a towel, and getting Mr. Cornish to help her. I always think of Cornish Game Hens!''

Ellie and Mark have two daughters: Grace and Rose.

She and her husband also own Ship’s Inn, a restaurant in Massachusetts.

Who is Ellie Cornell?

Ellie Cornell is famous for her role as Rachel Carruthers in Halloween.

Ellie Cornell was born on December 15, 1963, in Glen Cove, Long Island, New York. She is of an Anglo-American ancestry.

She attended Rollins College in Winter Park, Florida and graduated in 1986.

Cornell’s acting career began with a small guest appearance in a 1988 episode of Thirtysomething (1987).

She appeared in episodes of TV shows ABC Afterschool Specials (1972) and Gabriel’s Fire(1990), as well as the made-for-television movie Chips, The War Dog (1990).

Moreover, Cornell was in the pilot episode of The Event(2010) and played a detective in four episodes of the Femme Fatales(2011).

Ellie’s first movie is the 1988 comedy movie Married to the Mob.

She then gave an audition for A Nightmare in Elm Street: The Dream Master (1988) and Halloween 4: The Return of the Michael Myers (1988). She got the second role as Rachel Carruthers. The movie became a huge hit with a lot of appreciation for her role.

In 1989, she also appeared in Halloween 5: The Revenge of Michael Myers.

In 1992, Cornell was set to appear in the comedy A League of Their Own, but dropped out after finding out she was pregnant.

She disappeared from the film industry for nearly eight years.

After the long gap, she made a comeback in the 1999 film Free Enterprise. Next year, she appeared in the superhero comedy The Special.

In 2003, she returned to her horror roots by appearing in House of the Dead and appeared in four more horror movies in 2005 and 2006: The Darkroom, Dead Calling, The thirst, Room 6, Dead and Deader.

In addition to acting, She worked as executive producer in Where No Fan Has Gone Before: The Making of Free Enterprise (1999), Free Enterprises (1999) and The Specials (2000).

She was interviewed in the documentary Halloween: 25 years of Terror (2006).

Ellie’s Daughter is Proud of Ellie

Cornell once shared in the media that she took her daughter to see the semi-finals of American Idol (2002). While waiting in line, they approached Carrie Underwood for an autograph, who immediately recognized Ellie and exclaimed “Oh, my God! You’re in Halloween 4: Final Cut (2001)!”. Ellie’s daughter was extremely impressed and proud of her mother.

During the famous rooftop scene in Halloween 4: The Return of Michael Myers (1988), Ellie accidentally slipped and her torso was cut by a large nail.

She bled heavily but she came right back in a few minutes and completed the scene.

Her Co-stars said, “It didn’t even faze her.”

The actress has hazel-eyed blonde. She is 5 feet and 4 inches tall.

You may also know about body measurements, net worth, and career of Warren Lieberstein, Drena De Niro, Marita Stavrou.