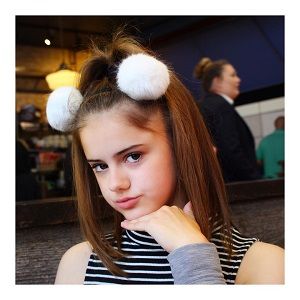 Ellie Louise is currently single. Furthermore, she has not been in any relationship to date. Although, she has been posting various photos along with a couple of boys.

Who is Ellie Louise?

Ellie Louise is a YouTuber from England. She rose to fame after appearing on the popular YouTube channel SevenSuperGirls.

Furthermore, she is also an Instagram star who has earned more than 161k followers on Instagram. Previously, she has also worked with Seven Funtastic Girls.

Ellie was born on September 20, 2001, in England. The names of her father and mother are not disclosed.

Moving towards her nationality, she is British and her ethnicity is unknown.

As a child, she developed her interest in acting. From the beginning of her childhood, she had a keen interest in gymnastics.

Concerning her education, currently, she is pursuing her high school.

Ellie Louise began her career as a YouTuber. Back in 2014, she collaborated and began to appear on channel Seven Funtastic Girls. Furthermore, he stole the limelight as she starred n the popular YouTube channel SevenSuperGirls.

Currently, SevenSuperGirls has almost 8 million subscribers and it’s videos have crossed billions of views. Moreover, she is also an Instagram star who has earned more than 161k followers on Instagram.

She has been appearing in the  SevenSuperGirls on their Sunday spot in 2017. Additionally, she also runs a self-titled YouTube channel which has crossed over 191k subscribers. Some of her most-watched videos on her YouTube channel are Gymnastics Truth or Dare, Vacation Expectation VS Reality, How to do the Splits, My Trampoline Gymnastics, and a few more.

Besides this, she has been sharing the screen along with Katherine SSG, Jenna Arend, and Jaidyn Lynzee in the hit YouTube channel SevenSuperGirls.

So far, Ellie has not won any awards in her career. Although, she has just started her career and she has been doing a great job in her field.

As of now, there are not any drastic rumors regarding her personal and professional life. Moreover, she has never faced any controversy in her career to dare. It seems Ellie has total focus on her work rather than stuck in any controversy.

She also has a TikTok account with over 2.2m followers.