Ellie Reed is an American actress and theatre artist. She is in a love affair with her college sweetheart, Morgan Patrick Maher. 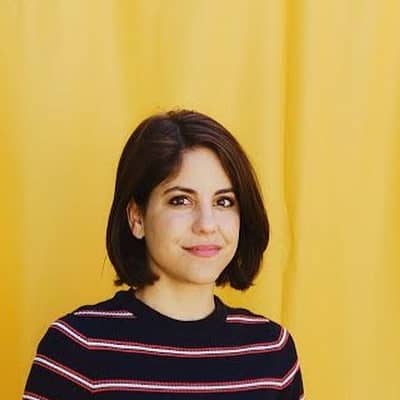 Ellie Reed’s current relationship status is mingled. She is in a love affair with her college sweetheart, Morgan Patrick Maher.

There is not much detailed information available regarding her boyfriend and their love life but they had graduated together. Also, Reed often shares their togetherness pictures on her social media sites. It seems they are enjoying their blissful moments with each other.

Who is Ellie Reed?

Ellie Reed is an American actress and theatre artist. She emerges the popularity after playing the best friend of the main character in the Netflix series, Girlboss.

Lately, she starred in the 2020 Ilana Pena’s television series in the episode of Diary of a Future President in the role of Danielle.

The actress was born in Deerfield, Illinois on the 2nd of February 1988. She is of American nationality and belongs of Caucasian descent.

The identity of her parents is Phillip Reed and Carrie Reed. She has a younger sister named Amy Reed. There are three years differences between these two sister’s ages.

Moving towards her academics, he graduated from Northwestern University in Evanston, Illinois. Then further studied she joined improv programs at The Second City Conservatory and iO Theater in Chicago, Illinois.

In 2011, Ellie joined the Griffin Theatre in Chicago and started her career as a theatre artist. She starred in numerous productions like ‘No More Dead Dogs’, ‘Letter Home’, ‘Men Should Weep’, and so on.

She served as a casting director in the Buzz22 theatre company in Chicago and also appeared in production like ”Hooters: A Play” and ”Quake”. Furthermore, some of the production where Reed has appeared are listed below,

Similarly, Reed made her screen debut through the short film, Positive Comment in 2010. Afterward, she appeared in three episodes of Touch ‘n Dix in 2012 where she portrayed the role of herself as Ellie.

Reed made her acting career big break when she landed a main supporting role as Annie, the best friend of Sophia which is played by Britt Robertson in Girlboss in 2017.

Moreover, some of her notable roles are enlisted below in the table,

Reed stays away from any sorts of rumors and controversies so, she is not available in such scandals and disputes.

Ellie’s primary source of income is her profession as an actress. Also, she might have earned a fair amount of fortune but her current net worth and other income haven’t yet disclosed.

As of 2019, she has an estimated net worth of around $500 thousand as per other online sources. She received her salary in the range of $150 thousand to $200 thousand annually.

The actress stands at the height of 5 feet 6 inches tall whereas her weight is around 56 kg. She has beautiful brown pair of eyes with brown hair color. Further, her other body measurement is still under review.

She has also a Tiktok account with more than 1.8k followers and over 201.1k likes. However, she is not available on Facebook.