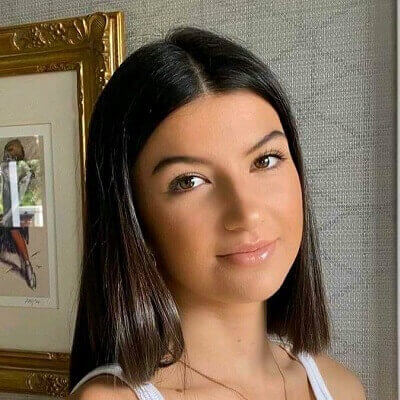 Ellie Zeiler is single. She is still just 15 years old. She is currently focused on her studies and her social media accounts. As of now, she has not revealed any of her past relationships, if she was in one.

Who is Ellie Zeiler?

Ellie Zeiler is an American social media personality. She is famous in TikTok and has over 2.4 million followers on the popular social media platform.

Her ethnicity is German, American.

Ellie is a high school student. She attends Del Norte High School. In middle school, she played golf and basketball.

Ellie Zeiler has an estimated net worth of around $75k USD. There is no information about her salary. She earns money through advertisements, promotions, etc from her TikTok and Instagram.

Zeiler stands at a height of around 5 feet 4 inches. She has not revealed her weight. Similarly, there is no information about her body measurements for breasts, waist, and hips.

Her hair color is black and she has a pair of brown eyes.

Ellie Zeiler started posting on TikTok in March 2020. She instantly started getting a lot of followers for her amazing looks. Moreover, her looks and style are very similar to Charli D’ Amelio. This made her gain even more attention and she started getting a lot of views in a short time. In just about a month she gained around 2 million followers.

Amazingly, Ellie looks very similar to her and her TikTok videos are also very similar to her. Charli even commented in one of her videos about how similar she thought they look. She gained a lot of attention and followers for this. However, things started getting bad after fans started accusing her of copying Amelio. Moreover, one of Charli’s fans posted a vide in Tiktok where she accused her of making a fake account of Charli and posting her pictures. In the viral video, the fan wrote,

“So we all know this girl Ellie Zeiler, who has gone viral recently for looking like Charli D’Amelio. Well, she created an account on Twitter pretending to be Charli. Here’s one of the pictures she posted. If you look at one of Ellie’s TikToks, she has the same exact rings. She even likes her own posts.”

The video started getting viral and Ellie had to respond. She claimed that she had nothing to do with the account and told fans that it was not her real account requesting people to stop accusing her. Eventually, she proved to be right as the person behind the account admitted that the page had nothing to with her. After that, the page was taken down.

You may also like to read the Bio, Career, Net Worth, Body Measurements, Social Media, and more about Charli D’ Amelio, Marc Gomez, Lovely Peaches (Brittany Johnson), and more.