(Actor and a musician) 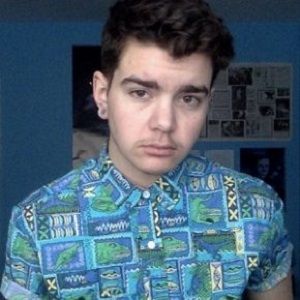 Elliot is a handsome guy and a heartthrob to hundreds and thousands of ladies. Although it is known to everyone that he is a transgender, this won’t stop his ladies fan to stop fantasizing about him.

Anyway, he is in a relationship. He is dating a girl named Danielle Raesin. She is very beautiful and the love from both the sides is deep.

He keeps updating his relationship status on his social media handle and says that he is very much proud of her and love her.

Who is Elliot Fletcher?

Elliot Fletcher is a popular transgender actor and a musician. He has played various characters in different TV series. Multi-talented actor, Elliot is popularly known for his role as a transgender character in the TV series, “Faking It”. He played a member of the band, “Noah’s Arc” and the love interest of Shane in it.

Fletcher also featured in TV series like “The Fosters” and “The Shameless” in 2016.

Elliot Fletcher was born on June 30, 1996, in the city of Angel, Los Angeles in the state of California. Elliot possesses American nationality and his ethnicity is North American.

He was born to the parents who belong to the same industry. He was born to the father, John DeMita and the mother, Julia Fletcher. His father is a film, theater, and a voice actor while his mom is a voice actress. Likewise his parents, he also grew with interest in acting too from a young age. Consequently, he went on to follow acting his profession.

Elliot Fletcher revealed that he has been a boy throughout his early life and never imagined being a girl as well.

He had all the luxury during his childhood as his parents are well off. However, he faced tough times when his parents separated when he was 8 years old and when he came to know about his gender. He said he wanted to die and tried to suicide twice.

Elliot started his professional acting career at the age of 19. It can be assumed that his parents’ profession has influenced his career decision in some ways. In 2016, he joined the cast of the American TV series, “Faking It”. He played the first transgender character in the series, Noah who was the love interest of Shane in the series. This landed him some major roles in other TV series.

Furthermore, he went on to play Aaron in “The Fosters” and Trevor in “The Shameless”.Additionally, he is also a theater actor and has worked on several theater productions. Elliot has also performed very musical shows in front of local audiences.

Elliot Fletcher: Salary and Net Worth

Elliot is one of the very few young guys who are very serious about their careers. He keeps his personal life far away from the media. This helps him to avoid any public rumors and any media controversies.


Elliot Fletcher has a height of 5 feet 7 inches. He weighs 67kg. Besides these, he has black hair and brown eyes.

Also know more about the early life, career, net worth, relationships, and controversies of other actor and a musician like Andy Samberg, Adam Sandler, James Marsters, John Francis Daley, and Lane Toran.