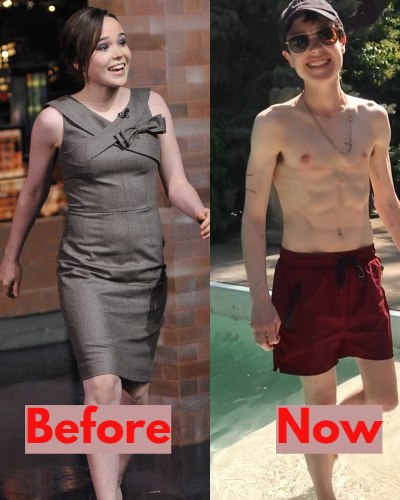 Elliot Page is all summer-ready with his rock-hard abs! Page shared a picture of himself shirtless by the pool on 24th May 2021.

This happens to be his first shirtless post on his Instagram since having surgery. He removed the breast tissue by undergoing surgery after coming out as transgender.

Page looked hot in his new transformed body and captioned the photo,

Also read Elliot Page divorcing wife Emma Portner after coming out as a transgender! A complete relationship timeline of the couple

More on the transformation

Back in March, he opened up about his top surgery which changed his life. With the conversation with Oprah Winfrey on The Oprah Conversation, Elliot said,

“I wanted to talk about it for a couple of reasons. I wanted to share with people just how much it has changed my life. And I want people to know that not only has it been life changing for me,”

“I do believe it is life saving and it’s the case for so many people… and because there is such an attack on trans health care right now, when already there is such a lack of access or trans people who don’t even want to go to the doctor.”

Page came out as a transgender back in December. Elliot also filed for divorce from his wife Emma Portner after three years after coming out. He filed for divorce on 25th January 2021 in Manhattan Supreme Court but it seems like their divorce has not been finalized.

Also read Pedro Pascal’s sister’s Lux Balmaceda Pascal came out as a transgender woman! How much is the net worth of Lux?

Elliot Page is one of the popular Canadian actors. He is most popular for his performance in movies like Hard Candy, and also win our hearts as a pregnant teen in Juno. He follows a vegan lifestyle.

Moreover, he was also named as one of the Sexiest Vegetarians of 2014. At a human rights campaign in Las Vegas on February 14, 2014, Page revealed his homosexuality and came out as a lesbian. Read more bio…

Dove Cameron reveals all about her sexuality and being queer!
Tags : Actress Hard Candy