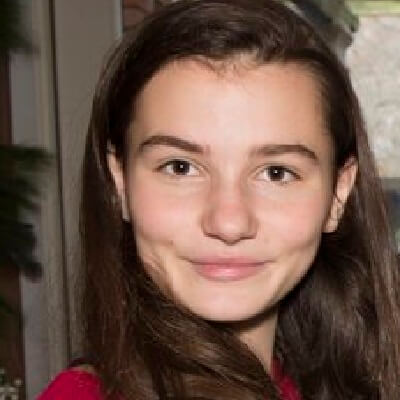 Right now, she is in self-quarantine with her family. Similarly, her parents are in self- isolation at their home in New York City.

Who is Elliott Anastasia Stephanopoulos?

Elliott Anastasia Stephanopoulos is notable for being a celebrity kid.

She is the firstborn daughter of an ABC chief anchor George Stephanopoulos with his wife, Comedian and actress Ali Wentworth.

On April 1, 2020, Elliot’s mother revealed her suffering through COVID-19 through an Instagram post while self-quarantining herself in their New York home. The photo showed her suffering in bed with high fever, body aches, and a heavy chest.

Her father also came out to announce that he had tested positive for  COVID-19 on 13th April 2020, just two weeks after his wife who was lost recovering tested positive.

He announced his coronavirus diagnosis on the morning news show, Good Morning America. He said he has no symptoms.

Discussing Wentworth’s progress with his co-hosts Robin Roberts and Michael Strahan, Stephanopoulos said ‘she’s doing much, much better’, and was ‘going into her fifth day with no fever and slowly getting out of bed a little bit more each day’.

Meanwhile, Elliot and her younger sister Harper Andrea Stephanopoulos have not confirmed contracting the Virus.

Anastasia was born to mother Ali Wentworth and father George Stephanopoulosborn on September 9, 2002, in the United States. As of 2020, she is 18 years old.

She has a younger sibling, Harper Andrea Stephanopoulos who is currently 14 years old.

Stephanopoulos is a student and doesn’t have any record of involving in ay kind of work or profession. However, her mother Wentworth is an actress and comedian by profession.

And, her father is the chief anchor correspondent of ABC news and also a  former political adviser to the Clinton administration.

Similarly, her aunt Sissy Yates is a jewelry designer.

Anastacia doesn’t really have any earnings. But she surely comes from such a very popular and wealthy family and therefore lives a luxury life.

Her father’s net worth is around $40 million. He was on the top of his game during the presidentship of Obama and even made $15 million to $18 million a year. Whereas her mother has a net worth of around $6 million.

Anastacia uses Instagram and Snapchat. Both her accounts are private.

Elliot suffers from the medical condition called scoliosis which affects the curve of the back. Her parents posted a brave photo of their daughter wearing braces on Twitter. They decided on sharing the condition to the public in order to raise awareness among the people.

After the post, their fans were praising and encouraging parents and Elliot for warning people about the condition.

Elliot is a tall and lanky girl in her teenage. She has brown eyes with dark brown hair.

You may also know about the net worth, body measurements and career of Aaron Kendrick De Niro, Nakoa-Wolf Momoa, and Tallulah Fyfe Dempsey.