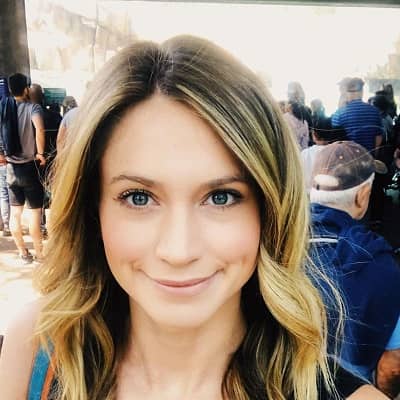 Ellison Barber is not married yet. She is in a committed relationship with Andy Tongren. Andy is the lead singer and guitar player for indie/alt-rock band Young Rising Sons.

In October 2016, Barber flaunts the photographs of Tongren for the first time on her Instagram account. Afterward, she often shared pictures of them together on her respective social media accounts. As of now, the pair has been together for at least four and a half years.

Recently, the lovebirds revealed their engagement news via an Instagram post. In January 2021, Tongren got down one keen and proposed to Barber with the engagement ring at Prospect park whereas Barber also gracefully accepted his proposal.

Hopefully, the couple might get married soon. Once Barber shared her dream of getting married in jeans instead of a wedding gown.

Who is Ellison Barber?

Ellison Barber is an American journalist by profession. She came into the limelight of the media after the unintentional encounter went viral during the Interview of Washington Capital’s star Alexander Ovechkin at WUSA during a snow blizzard in 2016.

Ellison is currently served as a correspondent for NBC News based in New York and has reporting under the 2019-20 coronavirus pandemic in the United States.

The Journalist was born on October 20, 1989, as Ellison Litton Barber. She hails from Atlanta, Georgia. She holds an American nationality and belongs to the Caucasian ethnicity.

Ellison is the middle child of her parents Reverend Don (father) and Cheryl Barber (mother). Her parents are also familiar personalities who were hosts of an Emmy-nominated talk show, GoodNews. She has two sisters an elder named Stewart Barber and a younger named Lindel Barber Waclawski.

Talking about her academics background, she attended the Wofford College form where she graduated in the year 2012 with a Bachelor of Arts in English. After graduation, she worked as a staff writer and report on the US Congress for the website called “The Washington Free Beacon”.

Ellison takes off her journalism career from Washington’s CBS affiliate, WUSA where she served as the Prince George’s Country Deputy Bureau Chief and a general assignment reporter. She has reported several stories like the 2015 Washington, D.C., mass Killing of the Savopoulos family and their housekeeper Veralicia Figueroa,  the protests following the shooting of Terrence Sterling, and more.

In April 2017, she joined Fox News based in the D.C. bureau as a general assignment correspondent. While working with Fox, she has covered top stories like the May Day protest against President Trump’s executive orders on Immigration, Charlottesville car attack.

Also, she traveled to Venezuela in May 2019 to cover its humanitarian crisis as hundreds were fleeing for Colombia. She became the first reporter for U.S based English language network to travel Maicao.  However, she left Fox News after working three years together and joined NBC News on April 15, 2020.

To date, Ellison hasn’t been part of any sorts of rumors and disputes that create headlines in the media. Also, she stays miles away from such controversial acts that could hamper her personal and professional life.

Earlier, she had a skin cancer spot on her back. Although her doctor had removed them which needed 50 stitches. She assures others to take care of their skin.

Ellison is one of the well-known faces in the world of Journalism and she has earned an impressive amount of fortune throughout her profession as a journalist. As of now, she has accumulated around $1 million dollars of net worth.

She has worked for various media like Fox News, WUSTA-TV, MSNBC, CBS affiliate, and so on. According to Glassdoor, a Reporter at NBCUniversal can expect to make an average total pay of $56,452 per year alongside bonuses and additional compensation.

Similarly, while working with Fox, her average salary is between $79 thousand to $86 thousand.

The journalist stands at the height of 5 feet 4 inches tall and weighs around 59 kg. She has blonde hair color with blue pair of eyes. Other than this, there is no information available regarding her other body measurement.