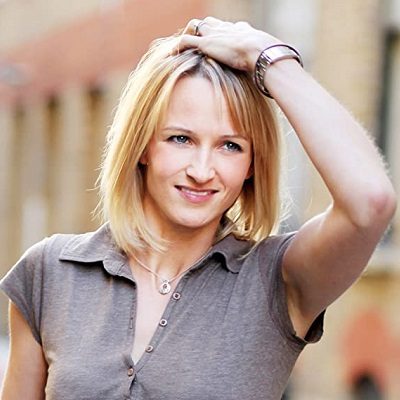 How long Elly Fairman has been dating Jason Flemyng?

Elly Fairman is a married woman. Her husband is non-other than the actor-director, Jason Flemyng.

The couple started dating in 2001. After seven years of relationship, she got married to the actor.

They had their destination wedding on the 6th of June 2008 in Tuscany, Italy.

Together, they have two children, Noah Flemyng and Cassius Flemyng. Being twins, Noach and Cassius share the same birthdate which is not disclosed yet.

Who is Elly Fairman?

British Elly Fairman is an actress, voice actress, and producer. She is renowned as Sandra of the Blitz, and Lucy of Small Time Obsession.

Elly Fairman was born on the 9th of July 1977 in Hammersmith, London. She is of Jewish-British ethnicity.

Elly Fairman started her career as an actress with the TV series, Hollyoaks. In the series, she appeared as Jasmine Bates.

Moving forward, she debuted in the movie with the love story drama, Small Time Obsession as Lucy.

Later, she started making an appearance in TV series that include Case Sensitive, Silent Witness, and Law & Order.

However, she is popular for characters like Gant’s Wife of London Boulevard, Natalie Lawrence of Fallen Angles, and Ellie of Dead Cert.

In 2017, she worked with the horror-comedy movie, Eat Locals as an associated Producer. The movie was also nominated for Silver Melies Awards at the Brussels International Festival of Fantasy Film.

Apart from acting, she is famous as a voice artist. In 1988, she first contributed her voice to the character, Miku Himuro in the animated series, Zeoraima: Project Hades.

Also, she contributed her voice to animated series like Mama Mirabelle’s Home Movies, Legend of the Dragon, and Oscar’s Orchestra.

Besides that, she has also voiced video games like Hellgate: London, Serious Sam II, and Desperados: The Shadow of El Diablo.

As an actress, her earnings are in the range of $19k to $210k. Besides that, she also earns through her production work too.

Her net worth is attributed to her movies’ box office collection including London Boulevard ($4.6 million) and Blitz ($15.8 million), and Wild Bill ($70 thousand).

As of now, she has not been through any sort of controversy that created a buzz in the media. Similarly, there are no rumors and scandals related to her.

She has a decent height and weight. However, details about her body stats are not available.