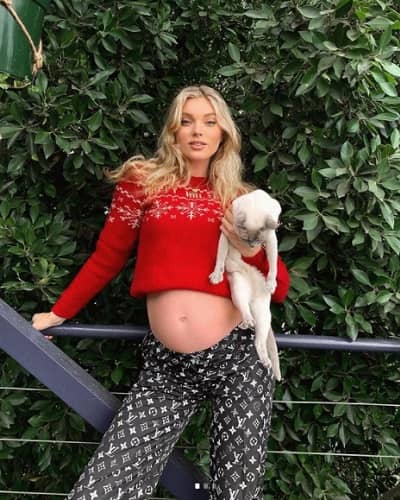 Elsa Hosk has been flaunting her baby bump time and again. On 15th January 2021, Elsa posted a picture of her showing her growing belly bump outside on her patio in her house in Southern California.

“This belly is getting real.”

She is seen wearing a matching set of blue tie-dye loungewear. On 1st January 2021, she posted pictures of her belly bump and wished for New Year.

Elsa announced her pregnancy in late September 2020 with a series of stunning maternity photos captured by photographer Sante D’Orazio. Hosk is more than excited to welcome her first child a daughter with her boyfriend Tom Daly.

Elsa has been craving Indian and Thai food. She has been eating curry and rice.

Also read Where is ’16 and pregnant’ star Jordan Cashmyer now? Know about her pregnancy, boyfriend, drug possession, arrest, escorting, trouble with the law

Elsa Hosk has an estimated net worth of $10 million. Recently, in 2020 she and her boyfriend Tom Daly paid $ 6 million for a home in South Pasadena which was made by architect Richard Neutra.

The house features three bedrooms and three bathrooms as well as a detached guest house and a swimming pool. Elsa also sold her apartment in New York City for $3.5 million around the same time.

She started modeling at a young age during high school after her father submitted photographs to various modeling agencies in Sweden.

Her vintage-inspired SoHo home located in New York City appeared in Architectural Digest. Talking about her dream home she said,

“I had a blank canvas to start from, which was really exciting because I wanted to build something that really felt like me,”

Who is Tom Daly?

Tom Daly is the co-founder and creative director of District Running Vision. It is a company that sells sunglasses made for running. He founded the company with one of his friends Max Vallot whom he met at the University of London.

Likewise, his company has its official Instagram page with 24.2k followers. They also sell T-shirts and various sports clothing outfits.

“We research and develop tools for mindful athletes, creating products that are equally function-first and performance enhancing. We believe in a holistic approach to athleticism and the idea that mental wellbeing is the foundation of every form of physical exercise.”

The couple started dating in the year 2015 and has known each other for years. They have been together for more than 5 years. They are adventurous couples who have traveled to various places.

ZaynGigi Vs. JustinHailey! Which ‘Baby’ is your favorite ‘Entertainer?’
Tags : Model Victoria’s Secret