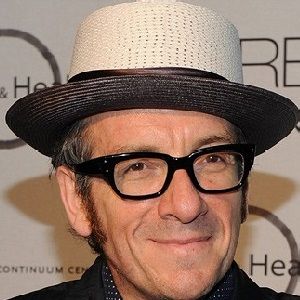 I used to be disgusted

now I try to be amused.

I believe that music is connected by human passions and curiosities rather than by marketing strategies.

Costello has been married three times. He first married Mary Burgoyne in 1974. They also have a son, Matthew. But no sooner the marriage ended in divorce in 1984.

Two years later in 1986, he married bassist Cait O’Riordan. This marriage also didn’t last long and they get separated in 2002.

And in 2003, he married a Canadian jazz singer/pianist, Diana Krall. The couple began dating each other back in the 2000s. Their love affair turned into marriage on 6 December 2003.  They also have twin sons, Dexter Henry Lorcan and Frank Harlan James.

Who is Elvis Costello?

Elvis Costello is an English singer, musician, record producer, songwriter, composer, author, television presenter, and occasional actor. He is recognized as one of the New wave musicians.

The songwriter is more popular for his innovative lyrics having a rich vocabulary which is so uncommon among most pop songwriters.

The actor was born on August 25, 1954, in London, England. His birth name is Declan Patrick MacManus but is famous by his stage name Elvis Costello. His father’s name is Ross McManus, who was a British big-band singer.

Likewise, his mother’s name is Lilian Alda, who is also one of the record store managers. His ethnicity is Irish and nationality is English.

However, when he was 7-years-old, his parents divorced and lived with his mother in Liverpool.

He has four brothers name, Ronan MacManus, Kieran MacManus, Ruari MacManus, and Liam MacManus in his family. He loves football and is a fan of Liverpool Football Club.

He has completed his education from St Francis Xavier’s College, Liverpool. other information about his education is unknown. Additionally, he has also learned to play guitar, harmonica, and piano.

He started his career working along with renowned musicians Mich Kent and Malcolm Dennis. They work together to form ‘Flip City in 1974. Though it didn’t receive good vibes and no sooner the band gets disbanded the next year.

Costello also used to play different solo gigs and earn some living to support his family. He utilized his free time writing different songs and recording its demo tapes. And they were sent to record but little all of them couldn’t achieve the success.

In 1976, he prepared a demo tape and sends in for an independent label Stiff Records. Stiff Records’ reads it and was so impressed by his work. No sooner Nick Lowe signed a contract with him.

And he also got a chance to adopt his name as Elvis Costello. Then he started to debut his albums. In 1977, he releases ‘My Aim is True’ which is produced by Nick Lowe. The album received good commercial success.

The musician forms his own backing band, ‘The Attractions’ along with Steve Nieve, Bruce Thomas, and Pete Thomas in the year 1977. His first song with this band was ‘This Year’s Model’ in 1978.

Respectively, ‘Armed Forces’ released n 1979. And this album receives various praises from many of the reviewers. As it also has clever and snappy lyrics it receives more praise.

It also features the singles ‘Accidents will happen’ and ‘Alison’. After the success of his previous albums, he was so motivated to release other different albums. He releases at least an album every year. One of the 1980s album titled, ‘Get Happy!’ also featured a sound different from its predecessors. So it also receives a good comment as it also consists of elements of R&B and soul music.

In 1981, he released the album ‘Trust’. But his songs weren’t as hits as before in the 1980s. But he manages to keep his reputation and produce minor hits.

He released several albums till 1989 which included ‘Almost Blue’ in 1981 and ‘Goodbye Cruel World’ in 1984, but they were not much successful.

Later on the year 1989 album, he releases ‘Spike’. And after a long time, it was a considerably better album than many of his previous ones. It was also the first one he releases along with Warner Brothers. The album was hit and receives good appreciation. It went Gold in both the U.K. and the U.S.

He then keeps producing various of the albums in the 1990s. But he could not revive his old popularity in today’s world. Bu the receive a great hit at one time. talking about this some of his recent albums includes: ‘North’ in 2003, ‘The River in Reverse’ in 2006, and ‘National Ransom’ in 2010.

Elvis has done an outstanding performance, he has also received various awards. Totally he won four awards and has been nominated 11 times. He received Best Original Television Music in 1992 for his work in G.B.H. (1991).

And in the year 2010 Gemini Awards, he was awarded Best Talk Series for Spectacle: Elvis Costello with… along with Martin Katz, David Furnish, Steve Hamilton Shaw, Elton John.

Elvis Costello: Salary and Net Worth

He has built a great career and also receives good appreciation. And so he has good earning. His net worth is $70 million. And his salary is also unknown.

Elvis Costello’s death hoax was spread on Facebook. However, in September 2018, the report confirmed that it was as a complete hoax and just the latest in a string of fake celebrity death reports.

And he didn’t receive other controversies. He was also once rumored to be dating Anita Claire French.

He stands with a height of 5 feet and 10 inches. But his weight is unknown. The singer has black colored hair and black colored eyes.

The musician is active on Twitter and ha more than 109K followers on his Twitter account. He also uses Facebook and has More than 518K followers on it and he has a Youtube channel with over 23.8k subscribers. He doesn’t seem to be active on Instagram. Moreover, Elvis also has his official website. There is the good presence of him on social media.

Also get to know about the biographies of other famous personalities like Richard Gere, Griffin Dunne, Jarrod Schulz, and many others.