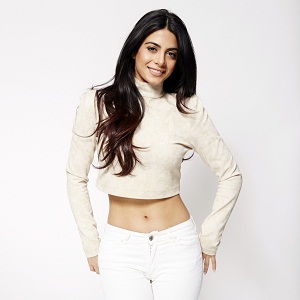 Dominic Sherwood would always tell me a joke right before it was my take or my close up. He'd say a funny joke, and I couldn't stop laughing, even after they said, 'Action

I'm very close to my parents and my grandma

I remember in middle school and high school being so concerned with what everybody else thought. I was trying to be someone I wasn't. I wish I could've just let it slide and not cared about it.

Emeraude Toubia is a married woman. She exchanged vows with a musician whom she was dating from 2011.

Who is Emeraude Toubia?

Emeraude Toubia is a Canadian-born American actress plus a model. She has played the character of Isabelle Lightwood in Shadowhunters.

She was born on March 1, 1989, in Montreal, Quebec, Canada. Her ethnicity is a mix of Lebanese and Mexican.

Her father was a Lebanese and her mother Mirta Sonia was a Mexican. She was the only child of her parents.

She has attended the Homer Hanna High School in Brownsville.

Emeraude Toubia has shown up on the ABC family that indicates “Shadowhunters” (2016-2019). The show is a supernatural drama and Toubia was playing the lead role of Isabelle.

But her first TV appearance was in 1999, on the show “Mundo de Niños.” In 2014, she showed up as Dulce Rincón on Venevisión’s telenovela Cosita Linda.

This actress’s net worth is estimated at around $1 million. She also endorsed brands like Sony, Garnier, AT&T, and more.

She and her husband own a house in Los Angeles which has a worth of $1.88 million.

Emeraude also involved with charities and helps a non-profit organization named Get Schooled.

This actress has never been associated with any huge rumors or scandals in her professional and personal life.

Her hair color is black and her eyes are in dark brown color.