As per the rumors, Emerson Hyndman is in a relationship with Gemma Diver. So far, he hasn’t confirmed their relationship.

But they are pretty linked up on social media. Apart from that, there aren’t any external affairs and the relationship of him. Moreover, he doesn’t speak about his personal life in the media. 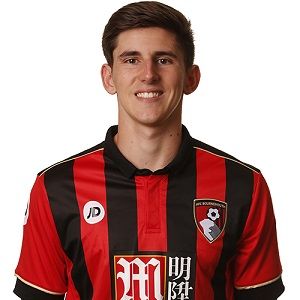 Who is Emerson Hyndman?

He was born Emerson Schellas Hyndman on April 9, 1996, in Dallas, Texas, United States. He is of Caucasian ethnicity and has American-Portuguese nationality.

His parents are Tony Hyndman (father) and Becky Hyndman (mother).

Emerson grew up with his family in Dallas. Furthermore, he perfectly plays baseball, basketball, and soccer.

Details about his siblings and education are not available.

Before coming to professional soccer, Emerson Hyndman spent his youth career in FC Dallas and Fulham youth academy. As a senior player, Emerson made his debut on August 9, 2014, for Fulham. Playing two seasons for the club, Emerson appeared in 25 matches and scored only one goal.

On June 17, 2016, he switched to Bournemouth in a four-year deal. But he didn’t play for the senior side and was later loaned out from the club.

As a Rangers player, he played his first match on 21 January 2017. In addition, he became more successful at Ranger compared to his former clubs. In 2018 played for Hibernian.

Since 2019, this player is associated with a Football team Atlanta United FC on a loan basis but they later signed him in Dec 2019.

Moreover, Emerson made his first appearance for the senior side in 2014 as a substitute.

This sportsperson’s estimated net worth is $500 thousand. In addition, his salary was recorded at £220,000.

So far, there aren’t any rumors or scandals regarding this player’s personal and professional life.

Moving towards his body measurements, Emerson Hyndman has a height of 5 ft 9 inches and weighs 61 kg. He has light brown hair and brown eye.