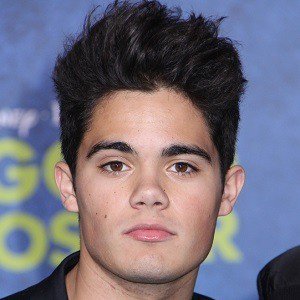 Emery Kelly is currently single. He was previously in a relationship with actress Bailee Madison in 2015 but the pair later broke up due to some unknown reason. Apart from that, he has not been linked with any other women. He is currently busy in his career rather than being in a relationship.

Who is Emery Kelly?

Emery Kelly is an American pop vocalist and actor who became famous after his participation in The X Factor in 2013. After that, he became a member of the pop group, Forever in Your Mind(FIYM).

He was born on December 28, 1997, in New York City, New York, USA. His birth name is Emery Mikel Thomas Kelly and he is currently 22 years old. His mother’s name is Joanna Kelly but his father’s name is not available. But, it is known that his father is a firefighter. He has an elder sister named Veronica Kelly.

He is an avid gamer and an accomplished athlete. In addition, he is brilliant in skateboarding and windsurfing. Emery holds American citizenship but his ethnicity is unknown.

He made his breakthrough after he appeared as a contestant on Season 3 of the reality competition series ‘The X Factor’ in 2013. He paired with two other competitors Ricky Garcia and Jon Lassen to form the group ‘Forever in Your Mind’, however, their group was the last contestants cut before the final 16. The group released their first video, ‘She Lights the World’ on November 7, 2013, which premiered on Just Jared Jr.

One of the group member, Jon, left the group in 2014 and later Emery’s cousin, Liam Attridge, making them trio once more. The group released several songs in 2015. The group along with Demi Lovato and other pop stars was on DigiTour in 2015.

He debuted his acting career from the series ‘Lab Rats’ in 2015 where he appeared as Logan in two episodes. He appeared as the main role of Lucas Mendoza on Netflix’s Original comedy series, ‘Alexa & Katie’ in 2018. Likewise, he appeared in ‘Best Friends Whenever’, ‘Dog With a Blog’, ‘Forever Boys’, etc.

He has been awarded the 2014 American Music Awards, Teen Choice Awards 2015, and 2015 Billboard Music Awards.

He has an estimated net worth of $2 million around and he has earned that sum of money from her professional career.

He has a height of 5 ft. 9 inches and weighs 70 kg. Emery has dark brown eyes and dark brown hair.