Renowned for playing Bree O'Brien in the series Chesapeake Shores. 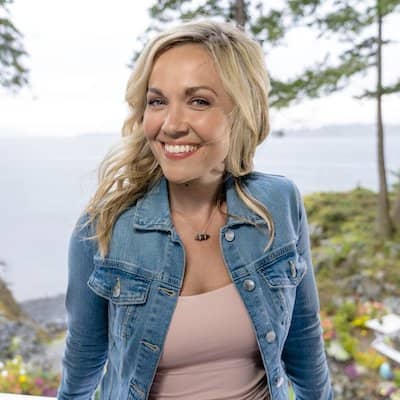 Emilie Ullerup is married to Kyle Cassie. Back in 2007, Emilie and Kyle started dating each other. They got legally married after dating for eight years.

In 2015, in a courtroom, the pair legally tied their knot. They kept their marriage secret from the public and walked down the aisle formally in 2018. Only a family member and a close friend were invited.

Emilie and her husband are fortunate to have a son named Wilde Mørkøv Ullerup Cassie, born on January 24, 2020.

Emilie Ullerup is a Danish actress who is also renowned for playing Bree O’Brien in the Hallmark Channel drama series called Chesapeake Shores.

Emilie Ullerup was born on Copenhagen, Denmark, Emilie Ullerup in 1984. Her birthday is every October 27th and she has the zodiac sign of Scorpio.

She is the daughter of Ove Ullerup Petersen and Bodil Mørkøv Ullerup. Her father worked as a diplomat and a lawyer. He was the decorated Danish Ambassador to Vietnam and had the title of Lord Chamberlain Garner for the Danish Royal Family.

With two sisters named Caroline Ullerup and Simone Ullerup, Emilie shared her childhood. Also, because of her father’s job, she grew up in various countries along with her siblings.

She was educated at a high school in Copenhagen in 2003. Then in 2005, she graduated from the Vancouver Film School on both the Acting Basics and the Film and Television Acting program.

By debuting the role of Julia Brynn on the remake TV series, Battlestar Galactica, in 2006, Emilie first moves her foot in the entertainment world. The show was shown on the Sci-Fi Channel.

Then, in 2007, she appeared in Blood Ties as Sandra. But by playing the leading role of Ashley Magnus in the 2008-2010 film, Sanctuary, she rose into popularity.

After acting in the movie titled Hunt to Kill in 2010, Emilie made her film appearance. She has been seen in films and movies such as Complexity, The Home, Step Dogs, Life on the Line, Black Burn, True Justice, Arctic Air, Smallville, and several more since then. She also garnered attention from the Supernatural TV series in 2011.

As a Danish actress, her net worth has been valued at about $1 million as of 2020.

The star prefers not to be involved in any such activities that lead her name to appear in any rumors and controversial news.

Emilie Ullerup has a height of 5 feet and 5 inches with a bodyweight of 56kg. She has brown hair color and her eye color hazel eyes. Her bra size is 34 C.