Emily Alyn Lind is an American actress. She is extremely prominent for her role in 'Revenge', 'Eastwick', 'All My Children', 'The Haunting in Connecticut 2: Ghosts of Georgia', and 'The Babysitter'. She has made a respectable position in the American acting field at a young age. 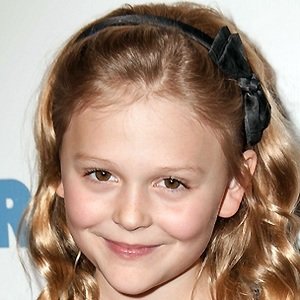 I have a really small puppy, Georgie, and one of my favorite things is to take her to the park and play with her. I take two classes at middle school, math and chorus, and I love walking home with her after school

You can have fun, but when it is time to work, work hard and be focused

I'm lucky to have worked with all the people that I have, and I really love what I do, and that is very important, too.

What is the relationship of Emily Alyn Lind?

Cute and adorable Lind is only fifteen years old and is an unmarried girl. She has managed to keep his personal information so secret that nothing relating her past and present affair status is published.

Who is Emily Alyn Lind?

Emily Alyn Lind is an American actress. She is extremely prominent for her role in ‘Revenge’, ‘Eastwick’, ‘All My Children’, ‘The Haunting in Connecticut 2: Ghosts of Georgia’, and ‘The Babysitter’. She has made a respectable position in the American acting field at a young age.

Lind was born to Barbara Alyn Woods and John Lind on May 6, 2002, in California, U.S.A. Her nationality is American and belongs to North American ethnicity.

Her mother’s name is Barbara Alyn Woods and father’s name is John Lind. She is growing up with her parents in a friendly and in an entertaining environment along with her siblings named Natalie Alyn Lind and Alyvia Alyn Lind. Lind was highly influenced towards acting field from a very early age and was dedicated too.

There is no factual information published regarding Lind’s educational status.

Lind made her professional acting debut in the year 2008 at the age of 6 and appeared in a film titled “The Secret Life of Bees” as ‘Young Lily Owens’. Next year (in 2009), she made her T.V debut and appeared in one episode of T.V series titled “Days of Our Lives” as ‘Grace’.

The same year (2009), she appeared in a successful T.V series “Eastwick” and starred as ‘Emily Gardener’ in a total of 5 episodes in a recurring role for which she receives huge positive responses and reviews from fans and viewers. In 2010, she appeared in a successful T.V film titled “November Christmas” for which she won ‘National Youth Arts Award’ in the category of ‘Outstanding Supporting Actress’. Some of her latest movies and T.V (films and series) include “Replicas” (2017), “The Babysitter”, (2017), “Code Black”, (2016), “Mind Games” (2014), etc.

Currently, there are no desperate rumors regarding Lind’s personal and professional life. It seems she is doing best job without harming others for which she hasn’t been a part of controversy yet. Also, she is so young to be a part of rumors and controversy.

Moving towards her body measurements, she has a good height of 5 Feet and 1 Inch with body weight 47kg. She has hourglass body with 30C-24-33. Her shoe size is 4(UK). Her hair color is blonde and her eye color is hazel.