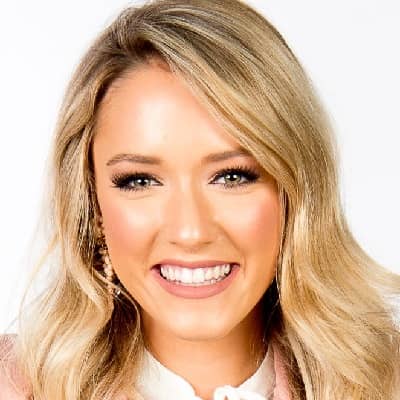 Emily is married to her longtime boyfriend Chris Sasser. She was just 16-year-old when she met Sasser in their Spanish class. Since there they were dating.

Her husband got down on one knee and proposed to her with the ring. The couple first shared the news of their engagement on Oct 28.

And dating for around five years, the couple exchanged vows in Nov 2020.

Who is Emily Ann Roberts?

Emily Ann Roberts is an American country singer. She became popular after appearing as a contestant on NBC’s The Voice season nine.

She was a member of Team Blake Shelton, and also became a finalist.

Emily was born on October 23, 1998, in Knoxville, Tennessee. Her parents are Tommy (father) and Kelly Roberts (mother). She also has an older sister named Abby.

Emily has a keen interest in music from her young age. She was in the 6th grade when he made her first public performance at the church.

She holds an American nationality and is of German, British, and Scottish ancestry.

She studied at Karns High School, Tennessee from the year 2015. After completed the show, she continued her high school education online. And finally

Emily used to play at different restaurants in her initial days. She first played at the Mexican restaurant in Knoxville called “El Charro’s”. After playing there for a year she started playing at restaurants all over Knoxville. She used to sing in every competition she could get in. And finally, get auditioned for NBC’s The Voice season nine.

It was in the year 2015 and she was just 17 yrs old when she auditioned for it. She sang the song “I Hope You Dance,” in her blind audition and got two chair turns from judges Blake Shelton and Adam Levine. And she chooses Team Blake Shelton as her coach on the show.

Her renditions of the songs, “Blame It on Your Heart”, “Why Not Me”, and “She’s Got You”, were charted on the Billboard magazine chart. They went up to Nos. 43, 33, and 21 on the Hot Country Songs chart. Likely, she performed, “In the Garden”, which was able to be at No. 14 on the Hot Christian Songs chart. Emily was in second place in the finale to Jordan Smith from Team Adam.

After the show, the singer performed at different shows. Additionally, she recorded the Christian album Bigger Than Me, which she supported with an appearance on the package tour The Gospel Through Girls & Guitar in August of 2017.

Furthermore, Emily released her first original country song, “Stuck On Me + You”,  in September of 2018. It was able to hit the top 40 on the iTunes country charts. A month later, she released her second country original song titled, “I’ve Got Forever”. Just in Oct 2020 she released her single, Change My Tune.

The net worth of Emily is under review, yet she just has acquired a good sum of money from her singing career.

She has her own YouTube channel from which she earns around $3,000 per video. Other information regarding her earning is not available.

The singer has not been part of any such incident that cause her name to appear in the headlines of any rumors and controversy.

Emily Ann Roberts stands at a height of 5 feet 6 inches and a decent body mass. Similarly, she has a beautiful face with hazel eyes and blonde hair.

Likely, her TikTok account also holds around 29K followers and over 160K likes. Furthermore, she has her own YouTube channel with 17K subscribers.

Blessed With The Angel! Pregnant Lindsay Sloane Welcomed Her Baby no.2 With Her Husband Dar Rollins