Emily Bett Rickards is an actress who was on the series named 'Arrow'. She is currently single.

Talking about Emily Bett Rickards’s relationship she seems to be single right now whereas she never revealed her relationship status on any social media.

But there is a rumor of Emily dating Aisha Tyler who is an American actress, comedian, director, and host. She is bisexual. So, the rumors got started after a picture was posted where Emily is kissing Aisha and captioned true love.

In between 2014 and 2015, there were rumors that she was dating her co-star Colton Haynes and also they never confirmed or denied their relationship as a couple. Later on, it was known that he was gay and the two of them were just friends. 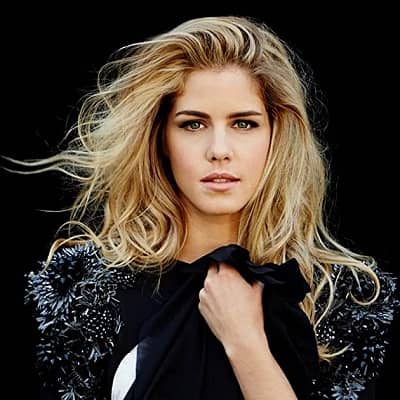 Who is Emily Bett Rickards?

As well she is also known for her appearance in one episode of the CBS superhero action-adventure television series ‘Supergirl’.

Currently, she is involved in dramatic films with new roles and stage plays.

The Canadian Actress was born on July 24, 1991. As of 2021, her age is 30 years and she was born and raised in Vancouver, British Columbia, Canada. Her zodiac sign is Leo and her nationality is Canadian and her ethnicity is Caucasian.

Her mother’s name is Diane Greig. Diane is a dream psychotherapist and hypnotist in Vancouver who is counted as one of the best psychotherapists in the world.

The school that she attained was Vancouver Film School -Acting Essentials and after graduation, she joined Alida Vocal Studio in Vancouver.

She is an actress by profession as well as she is an outstanding singer. Emily has also made the cover on Maroon 5’s Sunday Morning with youtube music star Travis Atreo.

As well recently she starring role in the film ‘Funny Story’ and her latest project is an audiobook entitled ‘The Wicked Ones’.

The Canadian actress started her career at a very young age of her life. She was fond of acting since childhood and she has also taken dancing and music lessons for building the foundation of her future show-business career. Rickards started her career in musical theatre and ended it by studying an acting course at Vancouver Flim School.

Her first step toward her profession was taken in 2009. She was starring in the video for the Nickelback single ‘Never Gonna Be Alone ‘.

After a lot of struggle for the first time in she got a chance to appear on the television screen. She played a minor role but a noticeable character in the movie named Random Acts of Romance. Similarly, she was just given a minor role in a movie named Flicks: Country Pride.

She had also taken part in an audition for playing in the TV series entitled Arrow and passed the competition well and also signed a contract. She gained so much positive response and became a permanent actress.

Rickards won the title of Best Actress and Best Ensemble Cast in 2020 at FirstGlance Flim Festival, Philadelphia. She has been nominated for 17 awards and won 2 awards in 2020.

What is the net worth of Emily Bett Rickards?

As a Canadian actress, her estimated net worth in 2022 is $2 million. Her primary source of income is her acting career where she earns a burly amount of money through her successful profession. Her salary is not mentioned on any social media.

What are the body measurements of Emily Bett Rickards?