Emily Blunt is an actress and she is married to actor John Krasinski. The couple has two children: Hazel and Violet.

Emily Blunt is a married woman as of now. She is married to a very talented actor/director, John Krasinski. They started dating in November of 2008. After dating for a couple of months, they got engaged in August of 2009.  Finally, the lovebirds got married on July 10, 2010.

Previously she was in the relationship with the singer, Michael Buble from 2005 to 2008. 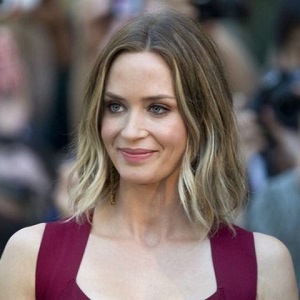 People quit on jobs. They quit on marriages. They quit on school. There's an immediacy of this day and age that doesn't lend itself to being committed to anything

I find it quite hard to sum up my relationship in a sound bite. I feel that it trivializes it for other people's pleasure. It's an adventure

It's always a little mind-boggling to realize that these famous actors know who I am.

Who is Emily Blunt?

London-born Emily Blunt is a popular film actress and a stage actress. She is active in this field since 2001.

Presently, she is also famous for starring in films like “Edge of Tomorrow”, “Into the Woods”, “Looper”, “A Quiet Place“, and others. Additionally, she is a prominent figure among the media for starring in the TV film, “Gideon’s Daughter”.

She even won the Golden Globe awards for portraying the role of Natasha in the film.

Emily was born in Wandsworth in the capital city, London in England. At the early age of 14, she had the problem of stammering. She was born on February 23, 1983.

She was born to parents, Joanna Mackie, and Oliver Simon Peter Blunt. Oliver is a barrister and Joanna is a former actress and teacher.

Discussing her education, she attended Ibstock Place School in Roehampton, southwest London. Afterward, she enrolled at Hurtwood House in Dorking, Surrey in a private sixth-form college. It was known for its performing arts program.

Emily Blunt’s career started in 2001. She made her acting debut through the play, “The Royal Family”. She was praised by the critics for her performances. The next year in 2002, she acted in “Vincent in Brixton”. Similarly, she also portrayed the role of Juliet in Indhu Rubasingham’s production of Romeo and Juliet at the Chichester Festival Theatre.

As per her on-screen career, she made her debut on the small screen in 2003. She played the role of Isolda in the TV film, “Boudica”. Afterward, she also featured in several episodes in TV series like, “Empire”, “Agatha Christie’s Poirot”, and others. In 2006, she won the “Golden Globe award for best supporting actress”. It was for her performance in the TV film, “Gideon’s Daughter”.

Contrary to TV, she made her feature film debut in 2004. She played the role of TAMSIN in the film, “My Summer Love”. As of now, she has acted in many movies. Some of them are “Sicario”, “Edge of Tomorrow”, “Sunshine Cleaning”, and “Looper”.

Her profession pays her a huge amount of salary. Presently, her net worth is estimated to be around $40 million as of 2022.

Emily avoids the topics that can drag her into media controversies. Also, she doesn’t live a controversial show-off life. She likes to keep her image clean ignoring the rumors and media tittle-tattle.

Presently, there are no other rumors that surround her personal or professional life.

Her hair color is dark brown and her eye color is Bluish Green.