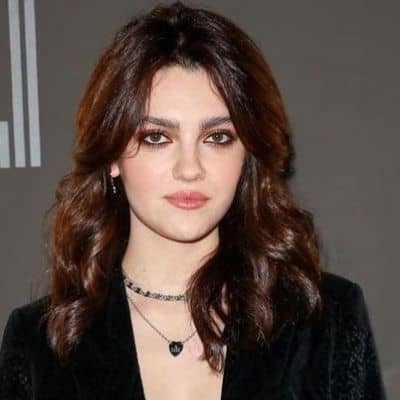 Who is Emily Carey Dating?

Emily Carey prefers to keep her personal life private, and she may announce who she’s dating once she finds the love of her life. The ‘House of the Dragon‘ star has not discussed any specifics about her prior relationships.

Regardless, She is rumored to be dating, Kelli Marie. Even though, none of them has officially confirmed their relationship.

Who is Emily Carey?

Emily Carey aka Emily Joanna Carey is a known English actress and model. She soared to fame after portraying the young Alicent Hightower in the American fantasy series, ‘House of the Dragon.‘

She is also well known for her role as Grace Beauchamp in Casualty  (2014–2017, 2021) and as Mika Cavanaughas well as in iPlayer, and in the thriller series, Get Even.

The 19-years-old actress was born on April 30, 2003, in Barnet, London, England. Emily holds British nationality while her ethnicity is English. Similarly, her birth zodiac sign is Taurus as per the astrological chart.

She was born to her mother, Sarah MacDonnell while the name of her father is still unknown. Other details of her siblings and educational life are yet to be disclosed.

At the age of nine, Emily Carey started acting on television and debuted by performing in ‘Shrek The Musical at The Theatre Royal Drury Lane.

In 2014, She got a chance to portray the role of Grace Beauchamp in BBC’s flagship Saturday night drama, ‘Casualty.’ She appeared in the 41 episodes of the show for the continuous season 5 from 2014 to 2021.

In 2017, She made her film debut by appearing in the movie, ‘Wonder Woman.’ In the movie, she was cast as Young Diana.

Her appearance as Young Lara Croft in the 2018 action-adventure film, ‘Tomb Raider‘ proved how she is a versatile actress.  The young actress has also worked in some animated movies like, ‘Where Is Anne Frank, which made the prime place and screened at the 2021 Cannes International Film Festival.

Emily is also a voice actress, who has voiced the featured characters like, ‘Monster Family 2‘, and ‘The Canterville Ghost.‘

She is able to grab various projects in 2022 including, her roles as the Teenage Wendy Darling in the movie, The Lost Girls.

Adding more, in her latest project, ‘House of the Dragon‘, Carey is seen portraying the role of young Alicent Hightower. The first season of the series consists of ten episodes and is set to premiere on August 1, 2022.

The following series is the prequel to the Games of Thrones, a television series, both of them are based on George R. R. Marti’s book, ‘A Song of Ice and Fire.’

Emily Carey, who works as an actress helps her earn quite a sum of money. As of 2022, it is estimated that her net worth is around $1.5 million.

Following estimation is quite liberal and may fluctuate from time to time.

As, Emily Carey, has openly announced she is a queer, she is rumored to be dating her female musician partner, Kelli Marie.

The duo is even seen sharing pictures and videos on Instagram and TikTok. But none of them have openly confirmed their relationship.

This British actress has openly announced, that she herself, Emily Carey is a queer and prefers to be mentioned as ‘he or they.’ is 5 feet 4 inches tall and weighs about 50kg. Her other body measurements are not available at present.

Furthermore, Carey has brown eyes and hair along with a fair complexion.

Heading towards her social media presence, She is pretty much popular on social media platforms. Emily Carey owns an Instagram account, which has more than 104K followers.

On the other hand, her Twitter account is enriched with over 21.7K followers. There is also a Facebook page under her name that has garnered about, 6.3K followers.

Apart from these, She has a verified Tiktok account, where she enjoys more than 127.4K followers with 3.7million likes under the username, @theemilycarey.

Other than this, There is also fan created Youtube channel under her name, which has about 2.87K subscribers. On the channel, her short movie clips are uploaded.