Emily Compagno is an Attorney, Host, and Sports Analyst from America. She was a cheerleader during her teenage days and has a sibling who has traveled to 85 countries. Emily is married and has two daughters. 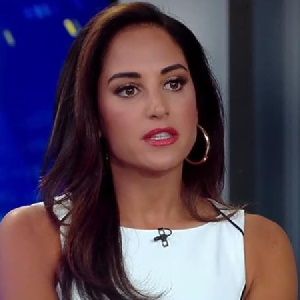 What an incredible moment (for me) with NFL legends Bill Romanowski, Terrell Davis + Andre Reed. So grateful for their perspective &

Since 2017, Pete Riley and Emily Compagno are together

Emily Compagno is married to Pete Riley on 13th September 2017. She uploaded a picture of her husband’s wedding ring.

Likewise, she has dated some basketball and rugby players in the past. But, there is no exact information about the names.

Who is Emily Compagno?

Emily Compagno is an on-air legal and sports business analyst. She is also the former cheerleader for Oakland Raiders.

Similarly, she recently appeared on Fox News host. She is also known for working with the digital sports magazine on a regular basis.

Emily Compagno was born on 9th November 1979, in Oak Knoll, California to John Compagno, father, and Katherine Bertsch, mother. She is of Italian-German ancestry and lives in Seattle, Washington, and San Francisco.

She has two sisters Natalie Compagno and Julietta Compagno Skoog. Likewise, her sister Natalie has traveled to 85 countries and writes for several international travel publications.

Furthermore, her sister Julietta is the co-founder of Sproutable which is a website focused on supporting parents to raise remarkable kids.

Now talking about her education, Emily Compagno is a native of EI Cerrito, California. She completed her undergraduate education at the University of Washington.

Likewise, she went on to obtain a J.D. from the University of San Francisco in the year 2006. Moreover, she completed an internship for Judge John Noonan of the United States Court of Appeals for the Ninth Circuit.

Emily Compagno was an NFL Cheerleader and before that she was working as a criminal defense attorney near San Francisco. After that, she joined Raiderettes, the cheerleading squad for the Oakland Raiders.

Similarly, she became the squad’s captain and served as one of four NFL cheerleaders. Also, she got the chance to represent the NFL for the launch of NFL China in Beijing and Shanghai, China.

Later, she worked as a civil litigator and later landed a position as a general attorney at the Social Security Administration between 2010 and 2014.

As of now, she is working on-air legal and sports business analyst as well as a lawyer in private practice. Likewise, she also appears as a guest commentator on the Fox News Channel and Fox Business Network.

Additionally, she offers sports business and legal analyses for several national networks and local television stations. When she was working as a reporter, she covered the PAC 12 sports event and hosted professional sports features and Fanspeak segments.

The first season of Crimes That Changed America, a Fox Nation show hosted by Compagno, premiered on March 9, 2020.

On January 25, 2021, Compagno has named a permanent co-host of Outnumbered. Harris Faulkner and Kayleigh McEnany are her co-hosts, though she occasionally guest co-hosts The Five.

During a Zoom videoconference, Compagno expressed his support for the mass termination of 900 Better.com staff.

Emily Compagno has not received any awards yet. Also, she has not been nominated for any awards.

Compagno is presently employed as a legal and business analyst in the sports industry. Outnumbered on Fox News has her as a co-host.

She’s also made guest appearances on shows like The Greg Gutfeld Show and The Five on the news channel. The analyst covered PAC-12 athletic events during her tenure as a sports reporter, which catapulted her into the spotlight.

Emily Compagno of Fox News has also contributed to a number of radio sports shows and digital sports publications.

Net Worth of Emily Compagno

Has she been in any controversy?

Emily Compagno had a debate with Britt McHenry on Fox News Watters World in 2018. Britt McHenry voiced her opinion on Twitter which created a bit of a Twitter storm. Both of them had a strong opinion.

Other than that she has not been into any big rumors and controversy.

Talking about Emily Compagno’s body measurements, she has a height of 5 feet 6 inches and a weight of around 55 kg.

Similarly, her body measurement is 34-23.5-34 inches with a bra size 34B. Her dress size is 4. Likewise, she has hazel eyes and dark brown hair.

How much does Emily Compagno make?

Where did Emily Compagno get married?

Where has Emily Compagno been lately?