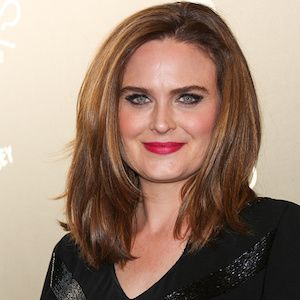 I'm definitely a people person. I love socializing and being around people and having a good conversation

I was a hostess in a restaurant in New York when I was 21, and I was too good of an employee. I was putting most of my energy into that instead of acting. But my father told my sister and me to look at whatever needed to be done and do that job well, no matter what it was

The actress Emily Deschanel has been married to the actor David Hornsby on 25 September 2010. She had celebrated her wedding in a small private ceremony in the Pacific Palisades area of Los Angeles.

Their relation was going quite well and on 21 September 2011, the pair had their first son, Henry Lamar Hornsby. And on 8th June she had bared her second son, Calvin. There is almost no chance of a divorce to occur in their lives and they are strong living happily together.

Who is Emily Deschanel?

Emily Deschanel is an American actress and a producer. She has made and worked on many films. Her best role was for starring in the Fox crime procedural comedy-drama series Bones as Dr. Temperance Brennan from 2005 to 2017.

She is the first daughter of Caleb Deschanel(father) and actress Mary Jo Deschanel(mother). She has a sister, Zooey Deschanel. Her nationality is American and ethnicity is Mixed (Swiss, Dutch, English, Irish, and French).

Emily Deschanel had attended Harvard-Westlake and Crossroads School in Los Angele. And she had also completed her graduation from Boston University in the field of  Professional Actors Training Program with a Bachelor of Fine Arts in Theater.

Deschanel started her career in 1994. Her first film was of romantic comedy-drama It Could Happen to You.  She had also played an adorable role as Pam Asbury in Stephen King’s horror miniseries Rose Red in 2002. In 2004 she has also appeared in  Cold Mountain, The Alamo, and Glory Road and was named one of “six actresses to watch” by Interview Magazine.

Then from 2005 to 2017, she had played in a series named forensic anthropologist. Through this show, she was nominated for Satellite Award in 2006 and Teen Choice Award in 2007. She with other members,  Alyson Hannigan, Jaime King, Minka Kelly, and Katharine McPhee made a video slumber party featured on FunnyorDie.com to promote regular breast cancer screenings for the organization Stand Up 2 Cancer.

In recent years she had started to keep interested on animal welfare which has led her to provide the narration for My Child Is a Monkey and serving as an associate producer on the documentary film How I Became an Elephant.

Emily’s net worth is estimated to be $30 million and her salary is unknown. She has achieved huge success from her multiple careers and is living a lavish life with decent earnings.