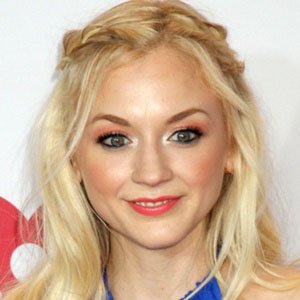 When I was little, we moved around a lot, actually. In second grade, I think I went to three different schools. We were in Nevada and Oregon and as well as a few different places in Nebraska. I did go to high school in the same town

Acting is so much about waiting... waiting for an audition, waiting for the right part to come along. It's nice to write your own thing, write about what you're feeling and then go out and perform them. It's a nice thing to have and not get bored

It's definitely one of those things when you decide to be an actor that it would be really cool to be in a Broadway show or a series regular on a hit show.

Emily Kinney is possibly single. Although her career took on a successful path her love life couldn’t do so. Previously, she was in a relationship with Matthew Koma but her relationship didn’t last for long.

Then she was in a relationship with Ryan Adams in 2015 which also couldn’t last for long. She hasn’t been in other relationships that we know of.

Who is Emily Kinney?

Gorgeous and beautiful Emily Kinney is an American well-known actress, singer as well as a songwriter. She is best known for her character as Beth Greene in the AMC network’s hit zombie series The Walking Dead in 2011.

In 2016, she appeared on the ABC series Conviction along with Hayley Atwell.

Emily was born on 15 August 1985, in Wayne, Nebraska. She is of Irish-German-English ethnicity and has American nationality.

She is the daughter of Vaughn(father) and Jean Kinney(mother). Her birth name is Emily Rebecca Kinney. There is no information on her siblings.

In her childhood, she has frequently moved from one place to another including Nevada, Oregan, and other parts of Nebraska.

Kinney studied at New York University for a semester and graduated from Nebraska Wesleyan University with a Bachelor of Arts degree in theater.

She started her career in the entertainment field at the age of 21 debuting in a play “Spring Awakening” as Anna who is a smart and carefree resident in a tough city. With her acting skills, she was successful to impress fans and critics.

Kinney’s career took on a successful path when she was cast in the 2011 television series “The Walking Dead”. She has also sung for the series collaborating with Lauren Cohan. Her success in the career path has paid her well financially.  On 26 January 2017, it was announced that she will be joining the cast of ABC’s “Ten Days in the Valley” where she will play the character of Casey.

Although it’s hard to put up an actual annual salary in a figure, her net worth is estimated to be $3 million. She has achieved huge success from her multiple careers and is living a lavish life with decent earnings.

This actress has suffered most of the controversy for her on and off-going relationships.

She has a blue eye color and has a blonde hair color. Her shoe size 9 (US) and dress size 6 (US).