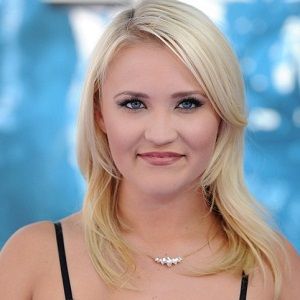 Actors pull from their own experiences to bring reality to the characters. I wouldn't want to play someone who's a lot like me. There would be no turning it on or off

I don't get embarrassed easily, and I do silly things all the time!

Emily Osment, 29, is an unmarried woman. However, she has dated several hunks in her life. In 2002, she was in a relationship with actor Frankie J.

Allison and broke up after a couple of years in 2004. Back then, there was also a rumor that she was dating Daryl Sabara. Furthermore, she also dated Cody Linley in 2005 and continued their relationship for two years.

In addition, she was also linked up with Mitchel Musso and Tony Oller. Besides them, this American actress also dated Nathan Keyes and Jimmy Tatro.

Recently, her name was also added with Jim Gilbert. As per the reports, Cody and Jim are enjoying their love life and living happily.

Who is Emily Osment

Emily Osment is an actress and singer from America. She rose to fame after appearing as Gerti Giggles in Spy Kids 2: The Island of Lost Dreams.

Later, she also starred in a couple of hit films such as Hannah Montana: The Movie, The Haunting Hour: Don’t Think About It, Dadnapped.

Furthermore, she has also landed some notable roles in Cyberbully, Young & Hungry, and Spy Kids 3: Game Over. In addition, Emily has won a couple of awards such as the Canadian Screen Award, Prism Award, and Teen Choice Award.

Emily was born on March 10, 1992, in Los Angeles, California, USA. Talking about her nationality, she is American and her ethnicity is mixed (English, German, Irish, Austrian).

She is the daughter of Eugene Osment and Theresa Seifert Osment. Being a daughter of an actor, she developed her interest in acting from the early age of her childhood.

Moving towards her education, she attended Flintridge Preparatory School. Later, she completed her graduation from Occidental College in 2015.

Emily began her acting career as a child in a commercial. In 1999, she appeared as Miranda Aiken in the film The Secret Life of Girls.

A couple of years later, Emily landed the role of Gerti Giggles in the huge hit Spy Kids 2: The Island of Lost Dreams in 2002 followed by its sequel Spy Kids 3-D: Game Over in 2003.

Furthermore, she also starred in the 2005 animated movie ‘Lilo & Stitch 2: Stitch Has A Glitch’. Moreover, she was also part of the famous TV series Hannah Montana along with Miley Cyrus and Billy Ray Cyrus.

Additionally, she also played various roles in TV series such as Friends, Daadnapped, Jonas, Life with Boys, Family Guy, and a few others.

From Dadnapped and Soccermom, she again stole the limelight. Some of her recent films include, No Way Jose, Love Is All You Need?, and Tea Time with Mr. Patterson.

Moreover, Emily has some notable works in Cleaners, A Daughter’s Nightmare, and Young & Hungry. Besides acting, Emily is also a singer and songwriter. As of now, she has released an album named Fight or Flight in 2010.

Previously, she has also launched an EP, All the Right Wrongs in 2009. In addition, she has also toured in 2010 such as Clap Your Hands Tour and GFight or Flight Tour.

Being a famous actress and singer, she pockets a handsome amount of money from her profession. Currently, she has a net worth of $3 million.

As of now, there are not any drastic rumors regarding her personal and professional life.

Emily has a height of 5 ft 2 inches and weighs 54 kg. Moreover, she has a pair of attractive blue eyes and blonde hair.