Emily Ratajkowski is an American model and actress. She is married and a mother of one. 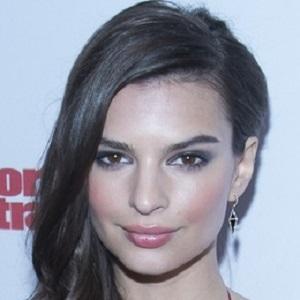 We are more than just our bodies, but that doesn't mean we have to be shamed for them or our sexuality

The world should not be exclusive of the ideal body. It has to include all ideals, all bodies

Being part of a patriarchal society, it kind of helped me figure out what I was all about.

Emily Ratajkowski is now a married woman. Her husband’s name is Sebastian Bear-McClard. They exchanged vows on 23 Feb 2018.

Emily and Sebastian welcomed their first baby Sylvester Apollo Bear. Their child’s gender is neutral. Sylvester Apollo Bear was born on 8th March 2021 which she announced via her IG handle. She shared a photo on Insta where she was breastfeeding her child with the caption,

Sylvester Apollo Bear has joined us earth side. Sly arrived 3/8/21 on the most surreal, beautiful, and love-filled morning of my life.”

She announced that she is pregnant with her first child with her husband Sebastian.

Proposal without a Ring?

Sebastian proposed to Emily at Minetta Tavern without a ring. Arghhh!! After the awkward situation, Sebastian made a ring out of the paper clip that the bill was paid. She liked it and felt it was quite romantic.

Later, the couple made the real rings.

Also read check out how they celebrated their 3rd wedding anniversary

She has been in a few relationships in her life in the past.

In February 2014, she broke up with her boyfriend Andrew Dryden, a creative director, and menswear buyer.

Who is Emily Ratajkowski?

Emily Ratajkowski is an American actress and model. Emily is popular for appearing in music videos like “Blurred Lines” and Maroon 5’s “Love Somebody“.

She has appeared in numerous music videos and magazines.

She is an American by nationality and is of Polish, Ashkenazi Jewish, Irish, German, and English ethnicity. She traveled a lot and also spent some of her childhood in Ireland and Mallorca.

Emily was educated at San Dieguito Academy. After that, she enrolled at the University of California, Los Angeles. She was interested in acting from an early age. She began acting as a child on stage shows for her family.

Emily began her career as a child theater actress. Her first formal role was as Elsa in an adaptation of The Little Match Girl at the North Coast Repertory Theatre School in Solana Beach, California.

Later, in 2004, she played Harriet in the interactive Lyceum Theatre production of Harriet Potter and the Throne of Applewort.

At the age of 14, she signed as a model for Kohl and Nordstrom. At 15, Ratajkowski began auditioning for Disney and iCarly roles. She appeared as Gibby‘s girlfriend, Tasha in two episodes of the third season of Nickelodeon’s iCarly (2009–2010).

Emily began appearing in music videos in 2013. She appeared in the 2013 hit music video “Blurred Lines“. That same year, she appeared in Maroon 5’s “Love Somebody“. She also did photoshoots for several magazines at the same time. She worked with photographer Tony Kelly for the March 2013 GQ Turkey cover.

Emily became popular after appearing in the video “Blurred Lines“, especially as a sex symbol. In October 2013, Esquire magazine named her “Woman of the Year“. That same year, Rolling Stone magazine listed her among its twenty hottest sex symbols.

Emily has also acted in several movies. She earned her first leading role, opposite Zac Efron, in We Are Your Friends in 2015, in which she appeared as Sophie. She has also appeared in the TV films The Spoils Before Dying and Easy.

This actress has appeared in several magazines’ covers such as GQ, FHM, Cosmopolitan, and InStyle.

She has been a successful model in her career and she has a net worth of $8 million as per the sources.

Also, she earns $300,000 annually through brand endorsements and advertisements.

There is no rumor of her other love affairs at the present time. She has been in a few controversies in her life. She is criticized by her own fans for posing nude.

Emily says that she has become known as an activist who considers being both sexual and serious to be a non-conflicting ambition.

Emily Ratajkowski has a height of 5 feet 7 inches tall and weighs 55 kg. Her hair color is black and her eye color is dark brown.

Also get to know more about Ricki Lander, Maitland Ward, and Ursula Andress.