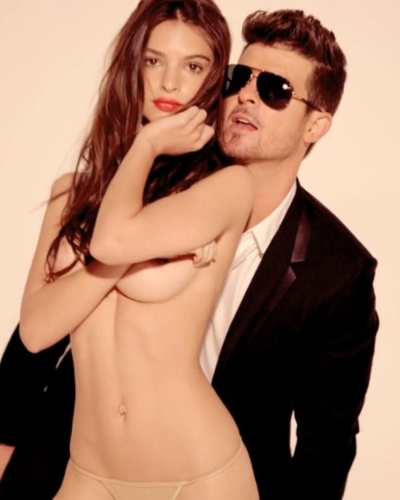 Supermodel Emily Ratajkowski has opened up about the sexual assault she faced on the set of the music video for the hit song Blurred Lines. In her upcoming book, she accuses singer Robin Thicke of groping her without consent during the filming of the 2013 video. She claimed that Robin returned to the set a little drunk to shoot just with him. Emily wrote,

“Out of nowhere, I felt the coolness and foreignness of a stranger’s hands cupping my bare breasts from behind. I instinctively moved away, looking back at Robin Thicke,”

Likewise, she felt humiliation pumped through her body. As she recalled the incident she quoted,

“I remember the moment that he grabbed her breasts. He was standing behind her as they were both in profile,”

More on her book

After the accusation came out on Robin Thicke groped her during the shoot in her book My Body, Emily is frustrated by the leak. Her book is set to come out on 9th November 2021 and has a collection of personal essays. Likewise, she was disappointed by the leak and said,

“because it’s not that I spoke out about this situation because I wanted some kind of political feeling or consequences for this person. It’s just a part of an essay which really sort of demonstrates the awakening that I had. And the nuance and complicated relationship I have to power and commodification and my body and my image.”

But shooting Blurred Lines was an empowering experience for her as there was mostly female crew on the set.

Emily Ratajkowski is an American actress and model. Emily is popular for appearing in music videos like Blurred Lines and Maroon 5’s Love Somebody.

She has appeared in numerous music videos and magazines. Read more bio…