Emily Sears is an Australian blonde. Emily is low key about her current romance. Previously, she dated cricketer Shane Warne. 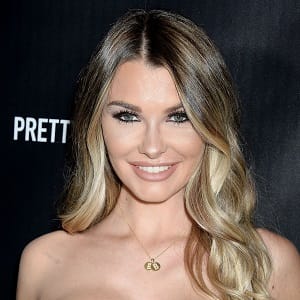 Emily Sears was previously in a relationship with Australian cricketer Shane Warne. The pair were spotted together in dinner held for Chris Martin‘s 40th birthday in LA. There is no further information regarding her past relationships. At present, she is believed to be single.

Who is Emily Sears?

Emily Sears is an Australian model. People mostly know her for her appearances in popular magazines including ‘GQ’, ‘FHM’, ‘Zoo Weekly’ and ‘Maxim.’

Additionally, she has also worked with brands like Esquire, Ciroc, Strikeforce MMA, and Monster Energy among others.

Sears was born in Melbourne, Australia on November 10, 1985. Both her parents were art publishers. In addition, her aunt Wendy Martin was the 1956 Australian Model of the Year.

Emily is of Australian nationality. Furthermore, the ethnic background is Caucasian. She also has a sister who is a psychotherapist.

Talking about her education, Sears has completed her high school education.

Sears initially worked with Harlem Productions Australia. Since then, she has appeared in several other popular magazines like ‘GQ’, ‘FHM’, ‘Zoo Weekly’ and ‘Maxim.’

Additionally, she has also been the face of various brands to date including Esquire, Ciroc, Strikeforce MMA, and Monster Energy among others.

Furthermore, as of 2018, Emily is based in Los Angeles, USA. In addition, she has also appeared in several music videos including Kanye West’s ‘I Won’ and G-Eazy’s ‘You Got Me.’

Sears has not been linked with any award nominations in her career.

Sears has not revealed her current salary. Furthermore, there are no details available relating to her estimated net worth.

Sears became part of several controversies after she revealed that she started forwarding explicit photos sent to her by her followers to their mothers, wives, partners or girlfriends. At present, there are no rumors concerning Emily and her career.

Also know more about the early life, career, net worth, relationships, and controversies of other models like Brielle Biermann, Mia Goth, Lizzy Caplan