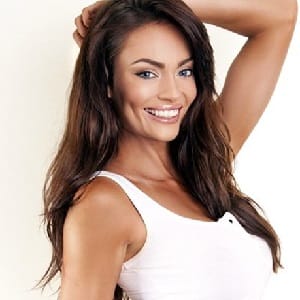 Emily Skye is currently in a relationship with Declan Redmond. The pair has been together for over eight years.  She announced through her Instagram that the couple is expecting a baby and she is three months pregnant. Later, she gave birth to a daughter, Mia Elise on December 18, 2017.

Who is Emily Skye?

Emily Skye is an Australian fitness model. She began her modeling career at the young age of 15. Emily Skye is a fitness expert and coach and advocates healthy living and health awareness.

Skye was born in Australia on January 7, 1985. She was raised by a mother after her father left her mother when Emily was two years old. Additionally, she `has a sister named Elisa.  She is of Australian nationality. Additionally, there are no details about her ethnic background at present.

Skye initially suffered depression as a teenager. Later, she decided to quit conventional modeling and began focusing on health and fitness. At present, she is one of the most recognized personal trainer and fitness model.

Skye received well deserved mass attention after she began posting makeup-free pictures to her Instagram during 2015. Since then, she has amassed huge fan following on various social media sites like Facebook, Twitter, and Instagram. Furthermore, she has now fully overcome her depression through healthy living.

Skye has not revealed her current salary. Additionally, there are no details about her estimated net worth at present.

Skye became part of a controversy after she revealed that she suffered depression as a child. Additionally, she also said that she tried to commit suicide at the age of 18. Furthermore, recently, she also became part of another controversy due to her pregnancy workout which according to some is not safe for the baby. At present, there are no rumors concerning her life and career.

Talking about her body measurement, Skye has a height of 5 feet 7 inches (1.7 m). Additionally, she weighs around 56.7 kg. She has a measurement of 33-25-34 inches. In addition, her hair color is dark brown and eye color is blue.

Emily Skye cracked a deal with Quadrant Private Equity as well as complete personally. Check out how she got through here as she was under Antidepressants