The 24-year-old American soccer star is an unmarried woman. So far, she has not seen anyone in the public and media. Besides this, Emily keeps her personal life so secret that no one is aware of it.

Moreover, there is not even a single rumor about affair and boyfriend of her. It seems she is totally focused on her work rather than stuck in any related stuff. 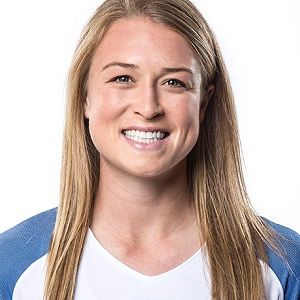 Who is Emily Sonnett?

Emily Sonnett is a professional American soccer player. Currently, she plays for Sydney FC on loan from Portland Thorns FC.

Emily was born on November 25, 1993, in Marietta, Georgia, United States. She is the daughter of Jane and Bill Sonnett.

She has a twin sister named Emma, who also played soccer for the University of Georgia. Talking about her nationality, she is American and her ethnicity is unknown.

From the beginning of her childhood, she had a keen interest in soccer as she began to play at a very early age.

Emily began her soccer career at her college, the University of Virginia. During her three years at college, the 24-year-old soccer player appeared in 98 matches and scored six goals. She has also become ACC Defensive Player of the Year.

In 2016, Emily was selected by Portland Thorns FC with the first overall pick in the 2016 NWSL College Draft.

Previously, she has also played along with Allie Long. Moreover, she moved to Sydney FC on loan on October 24, 2017. During her first match with Sydney FC, she netted a penalty kick.

Moving towards her international career, Emily had already represented the United States U18 and U23 levels. On October 16, 2015, she earned her first call-up to the U.S. women’s national soccer team.

On October 25, 2015, she received her first international cap against Brazil. As of now, she has appeared in 12 matches.

Being a professional soccer player, she pockets a decent amount of money from her profession. However, her salary and net worth are unknown.

As of now, she has won the ACC Defensive Player of the Year Award in 2015. Furthermore, she was also on the ACC All-Freshman Team in 2012.

So far, there are not any drastic rumors regarding her personal and professional life. Furthermore, she has not faced any controversy in her career to date.

Emily has a height of 5 ft 7 inches and her weight is unknown.

Furthermore, she has a beautiful pair of hazel eyes and light brown hair. Apart from that, there is not any information regarding her other body measurements.