Emma Andersson is happily married. Her husband is non-other than the ice hockey player, Henrik Zetterberg.

The couple got engaged in the summer of 2008. After two years, on the 23rd of July 2010, they eventually exchanged vows. The wedding ceremony took place on the Molle, Sweden.

Later, on the 20th of August 2015, they welcome their son, Love. Currently, the couple is leading a happy life with their family with no rumors of divorce and separation. 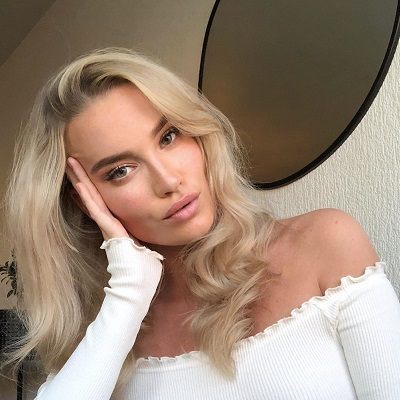 Who is Emma Andersson?

Emma Andersson is a TV Personality, host, and model. She is renowned as the winner of Expedition Robinson 2003.

Currently, she is associated with Sweden Models Agency as a model.

Emma Andersson was born on the 24th of April 1979 in the South of Sweden, Angelholm. Her birth name is Emma Cornelia Andersson. She is of Swedish ethnicity. As of 2022, she is 43 years old.

Till the date, she has not filled in any details on her family background regarding her mother, father, and siblings. However, she has shared a picture of her grandmother via her Instagram post.

Details on her academics are also behind the curtains.

The TV personality came in the limelight as a contestant of the Expedition Robinson 2001. From the show, she was voted out on the 36th day. Despite that, she earned huge popularity. After the show, she appeared in the TV series like Fråga Olle and Ursäkta röran, vi bygger om as a guest.

In 2002, she launched her debut music album, Who I Am. The song, Weightless became a huge success

After that, in 2003, she reappeared in the show, Expedition Robinson. The year, she won the show and was named the sole survivor of the season. Moving forwards, in 2004, she hosted the show, Dolce Vita for the channel, Kanal 5. Apart from that, she has hosted numerous shows for the channel.

Currently, she is active as a model. As a model, she is associated with one of the oldest agencies in Scandinavia, the Sweden Models Agency.

Apart from that, the royalties of her music are also a major source of her income.

Talking about the net worth, her husband, Henrik Zetterberg has an estimated net worth of $25 million. Back in 2009, he signed a 12-year contract with Red Wings worth $73 million.

Back in 2002, she was part of the segment of the TV show, Ursäkta röran, vi bygger om that made headlines in the news. The segment was named the Swedish Nazi-reference championship.

The program leaders of the segment made over fifty Nazi-reference to observe her reactions.

Emma Andersson is a hazel-eyed brunette. However, she prefers to color it blonde. She stands at a height of around 5 feet and 7 inches and has a decent weight.

On the account, she is following the personalities like Ellie Brown, Charles- Jesaja Akonnor, and Shaun King.

You may also read the bio of Alex Lange, Kylie Rae Hall, and Alexis Skye.