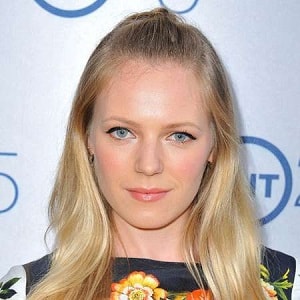 “I love just how beautiful Vancouver is. I mean, everywhere you look it's just mountains and ocean.”

Emma Bell married fellow actor Camron Robertson on October 6, 2018. The couple tied the knot on a mountaintop overlooking Pfeiffer Beach in Big Sur, California. They dated for four years before getting married.

There is not much information available regarding their marital life. They do not have any children yet. They are be living together and happily without any rumors of a separation.

Who is Emma Bell?

She is also popular for playing Amy in the first season of ‘The Walking Dead’ in 2010, and Emma Judith Ryland Brown on the TNT drama series ‘Dallas’ from 2013 to 2014.

She was born on December 17, 1986, in Woodstown, New Jersey. Her birth name is Emma Jean Bell and she is currently 33 years old.

She grew up in Flemington and the Stanton section of Readington Township. At the age of 16, she made her way to New York City. Her father’s name is Robert M. ‘Rob’ Bell and her mother’s name is Theresa ‘Tessa’ B./A. Horan.

Her father owns Green Birdie Productions, reporter, videographer, writer-producer for WWOR-TV and her mother was a producer of ’60 minutes’.

Her brother’s name is Chase Sterling Bell(musician). Emma holds American citizenship but her ethnicity is unknown.

Emma Bell debuted her acting career at the age of 12 in an Off-Broadway cabaret show in New York. She debuted screen in 2004 from the episode of NBC drama series ‘Third Watch’, later appeared on ‘Law & Order: Special Victims Unit’ and starred in the short-lived The WB series ‘The Bedford Diaries’ in 2006. Her other shows include ‘Supernatural’, ‘Law & Order’, and ‘CSI: Miami’.

She debuted film from the drama film ‘Gracie’ and appeared in ‘New York City Serenade’, ‘The Favor’, ‘Death in Love’’, and ‘Elektra Luxx’. She portrayed the role of Parker O’Neill in the film ‘Frozen’ in 2010 and the film received positive reviews from critics.

She reprised her ‘Frozen’ role in uncredited audio of ‘Hatchet II’ and portrayed the role of Amy in Season 1 of the AMC drama series ‘The Walking Dead’. She starred as Molly Harper in the 2011 thriller-horror film ‘Final Destination 5’ in 2011.

She has a net worth of around $3 million which she earned from her professional career. But her salary is not disclosed.

She is very secretive in nature and has not been engaged in any rumors and controversies in her life.

To know more about Madison Pettis, Ashly Burch, and Brooke Hogan, please click on the link.

Singer Camila Cabello and Shawn Mendes steaming performance in VMA’s 2019! Are they dating?