Emma Slater is a British professional dancer as well as a choreographer. Sh eis married.

Emma Slater is a married woman. Back in 2011, she began dating dancer Sasha Farber. They dated for almost three years from 2011 to 2014 and split up. However, in December 2015, they came back started going out.

On 4 October 2016, Sasha proposed Emma during a broadcast of Dancing with the Stars. Later, they got engaged and on 25 March 2018, this couple exchanged vows. 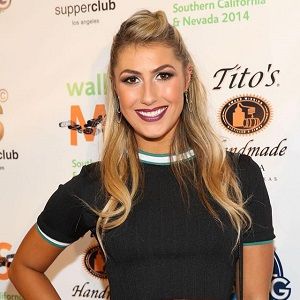 Who is Emma Slater?

Emma Slater is a British professional dancer as well as a choreographer. She rose to prominence after appearing on Dancing with the Stars.

In 2005, she won the British Under 21 Latin American Championships at the Blackpool Dance Festival.

Furthermore, she has also in the 2008 movie Mamma Mia!.

Emma was born on December 25, 1988, in, Tamworth, Staffordshire, United Kingdom. Talking about her nationality, she is British and her ethnicity is unknown. She grew up with her twin sister Kelly Slater.

From the beginning of her childhood, she developed her interest in dancing and also started training in ballroom and Latin American dance.

Emma Slater began her dancing career at a very young age when she began to train. At the age of 15, she was featured in a George Michael music video “Round Here”.

Since her beginning, she has been appearing in various theatre shows such as Simply Ballroom, Cuban Groove, Dirty Dancing, and a few more.

From 2009 to 2011, she also toured joining Burn the Floor performing in Belgium, Netherlands, Australia, Japan, South Korea, Canada, and a few others. Later in 2008, she also featured in Mamma Mia! along with Meryl Streep, Pierce Brosnan, and Colin Firth.

Back in March 2012, she joined the fourteenth season on the American edition of Dancing with the Stars. The next year, she choreographed Usher at the Billboard Music Awards in Las Vegas. From the 17th season, she has been a regular member of the show till the 25th season.

During her first season, she partnered with Bill Engvall and came 4th. In the 24th season of the competition, she secured 1st place with Rashad Jennings scoring 27 on average. In addition, in the 19th season, she got points from celebrities such as Kevin Hart, Pitbull, Tommy Chong, and Jessie J.

Being a successful dancer, she pockets a handsome amount of money from her profession. Currently, she has an estimated net worth of $300 thousand as of 2022.

Emma Slater has a height of 5 feet 5 inches and weighs 54 kg. Moreover, she has a pair of gorgeous brown eyes and blonde hair.

Also get to know about Lisa Armstrong, Jane Horrocks, and Anoushka Shankar.

All About The Vows!! Take A Look At The Wedding Plans Of Emma Slater And Sasha Farber; More About The Proposal And Their Relationship