Emma Stone is an Oscar award-winning American actress. Emma is married to her fiance, Dave McCary in 2020. She is pregnant with her first baby.

Emma Stone is married to her fiance Dave McCary in the spring of 2020. The couple wed secretly. Emma is currently pregnant with her husband Dave.

She engaged with a writer and director Dave McCary.

Previously, she was dating Andrew Garfield back in 2010, during the production of The Amazing Spider-Man. They were spotted together many times. Despite being in a sound relationship, the couple split in 2015.

In addition, her name linked up with her La La Land co-star Ryan Gosling while they were working together for the film. However, she denied the rumor and said it isn’t true. 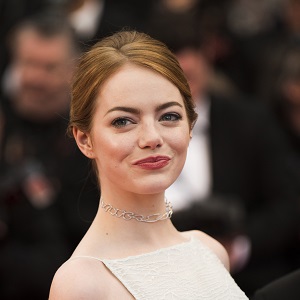 I was a good-looking kid. I never felt, like, dorky. I was just like, 'Yup, these are my braces. I've had them forever

I think 'Saturday Night Live', starting in the 1970s, really gave women an outlet to be funny. A lot of those women went on to have film careers, from Kristen Wiig now to Tina Fey and Gilda Radner

I used to do Facebook but you get a little too wrapped up in that stuff. Its more distracting than anything so I don't any more. I left it behind. I detoxed!

Who is Emma Stone?

In addition, she got a huge appraisal for the 2017 hit movie La La Land.

She is a child of Jeff Stone and Krista Stone born on November 6, 1988, in Scottsdale, Arizona, United States. Her full name is Emily Jean Stone.

Her father is the founder and CEO of a contracting company and her mother is a homemaker.

She has a younger brother Spencer Stone and her ethnicity is mixed Swedish, German, and British.

Then, she enrolled in Xavier College Preparatory but she dropped out just after one semester.

Initially, Emma Stone made her debut, in the reality, showing New Partridge Family (2004). She acted in the Fox action drama Drive as Violet Trimble. In 2007, she made her film debut in the comedy Superbad where she shared the screen with Michael Cera and Jonah Hill.

Stone‘s breakthrough moment came in 2009 when she gave back to back to back hits. Firstly, she played a ghost in Ghosts of Girlfriends Past. She signed another horror comedy blockbuster Zombieland, in which she was seen with Jesse Eisenberg and Woody Harrelson.

Emma has also appeared in the sex comedy Friends with Benefits (2011). Her character in the 2012 superhero blockbuster The Amazing Spider-Man lifted her to new heights.

Her character ‘Stacy’ followed the role in the sequel The Amazing Spider-Man 2 pairing the screen with Andrew Garfield.

Emma has managed to grab numerous awards, which including “The Academy Awards” for the best actress in La La Land in 2017. Moreover, she also grabbed “BAFTA”, “Golden Globe Awards”, and “SAG” for the same role.

The 2014 black comedy-drama, “Birdman” was critically successful and got nominations in nine categories. She got various nominations for movies like Birdman, Easy A, and The Help.

This actress’s net worth is estimated at around $30 million. Her 2019’s movie  Zombieland: Double Tap has earned around $122 million at the box office.

Emma has been in racial controversy for the movie Aloha where she has played the role of quarter Chinese and a quarter Hawaiian. After that, she dragged in the media for her background that she has starred as her Asian heritage.

She was heavily criticized for her role in the movie Paper Man, 2009.

Emma Stone is 5 ft. 6 inches tall and weighs 52 kg. Naturally, her hair is blonde but she likes to dye them Reddish-Brown and she has hazel green eyes.

She looks too cute with her smile and is known for her husky low-pitched voice.