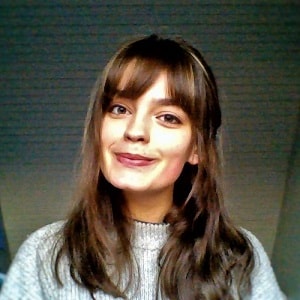 What is the relationship of Emma Tachard-Mackey?

Emma Tachard-Mackey has been dating her beau, Daniel Whitlam. Her boyfriend, Daniel is an actor by profession.

Emma first posted a photo of the two of them along of a girl and a boy holding hands back in January.

Both of them posted a sweet snap of them kissing in the bathrooms at the swanky Annabel’s Mayfair. There is no information since how long they have been dating.

Who is Emma Tachard-Mackey?

Emma Tachard-Mackey is a French-British actress. She is known best for her role as Maeve Wiley in the Netflix series, ‘Sex Education’ in 2019.

Emma looks-alike like an Australian actress and film producer, Margot Robbie, and she was often mistaken for Robbie in her early career for the same resemblance.

She was born on January 4, 1996, in Le Mans, Sarthe, France. She is currently 26 years old. Her birth name is Emma Margaret Tachard-Mackey.

She grew up in Sablé-sur-Sarthe and she holds French and British nationality. Her ethnicity is French.

She studied theatre and later attended the University of Leeds and performed at the Workshop Theatre and directed plays for the university’s theatre group.

She received her Baccalauréat (specialized in Literature), in 2013 in Nantes. Emma made her way to the UK at the age of 17.

She modeled for the English clothing line AIDA Shoreditch’s 2017 summer collection. She played as Michelle in the horror television film ‘Badger Lane’ in 2016, and later starred in ‘Summit Fever’ in 2018.

That series is her first major television series. Her pink hair in the series sparked a fashion trend and she has received positive critical reception for her performance.

She has an estimated net worth of around $3 million and she gets an average salary of $10,000 per episode.

She likes to keep her lips tight. However, she was criticized for her nude and raunchy performance in the comedy-drama series, Sex Education.

She has a height of 5 ft. 3 inches and she weighs 48 kg. She has light brown hair and light brown eyes.