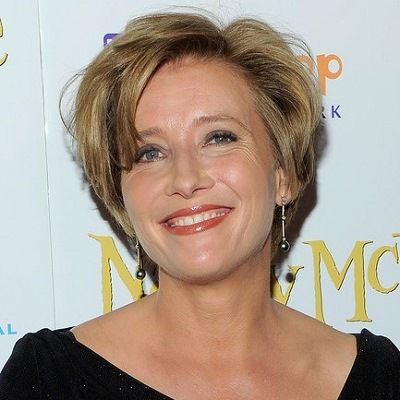 I can't stand this new culture of the instant disposable celebrity. It's all so vulgar

I mind having to look pretty, that's what I mind, because it is so much more of an effort.

What is the relationship of Emma Thompson?

Emma Thompson was in a relationship with Hugh Laurie, Emma confessed their mutual attraction while they were studying at Cambridge.

Even though they broke up due to undisclosed reasons, they continue to stay friends and share immense respect for each other’s work.

Emma met Northern Irish actor, Kenneth Branagh on the sets of the TV mini-series, Fortunes of War in 1987. They two got married in 1989.

Their brief period of creativity and happiness was jeopardized by Kenneth’s affair with Helena Bonham Carter on the sets of Frankenstein (1994).

There was also news of Emma suffering a miscarriage while she was still married to Kenneth. She gave divorced Kenneth in 1995.

Emma met actor Greg Wise for the first time on the sets of Sense and Sensibility (1995) when it was being filmed in 1994. Greg’s long-term acquaintance with Emma eventually culminated in a relationship and the two got married on July 29, 2003.

Another miscarriage suffered by Emma led the couple to plan a child with the help of IVF. Together, the couple has one daughter named Gaia (born in 1999).

They also adopted an orphan from Rwanda in 2003, named Tindyebwa Agaba whom they met at a Refugee Council party when he was 16 years old.

Who is Emma Thompson?

Emma Thompson is a longtime English actress, screenwriter, activist, author, and comedian, who often portrays enigmatic and matronly characters with a sense of wit, frequently in period dramas and literary adaptations.

Emma was born in Paddington, London, England on April 15, 1959. Her birth name is Dame Emma Thompson.

Her father’s name is  Eric Thompson of the popular children’s television series, ‘The Magic Roundabout’ fame and her mother’s name is Phyllida Law, a Scottish actress.

She has a sibling namely, Sophie Thompson who also works as an actress. Emma holds British citizenship and mixed (English- Scottish) ethnicity. Her birth sign is Aries.

Talking about Emma’s education history, she attended Camden School for Girls. She later joined he began studying for an English degree at Newnham College, University of Cambridge.

Talking about her profession, during 1980, Emma Thompson became the Vice President of Footlights, the university’s sketch comedy troupe, and also co-directed the troupe’s first all-female revue, ‘Women’s Hour. Her team was awarded the Perrier Award for ‘The Cellar Tapes’.

Likewise, she came to the limelight in 1985, with the ‘West End revival of the musical, ‘Me and My Girl. Then, two years later, she played lead roles in two television miniseries, ‘Fortunes of War’ and ‘Tutti Frutti’.

Similarly, she made her film debut with the 1989 romantic comedy ‘The Tall Guy, a box-office disappointment.

Starring Jeff Goldblum, she played a nurse with whom he falls in love.

She portrayed Princess Katherine in Branagh’s screen adaptation of Shakespeare’s ‘Henry V’, in 1989 and the following year acted alongside Branagh in his stage productions of ‘A Midsummer Night’s Dream and ‘King Lear.

She was also cast alongside Judy Davis and Hugh Grant in the film. In the year 1992, she worked with Stephen Fry, Hugh Laurie, Imelda Staunton, and Tony Slattery in ‘Peter’s Friends.

Directed by Branagh, it was about a group of Cambridge alumni reunited ten years after graduation.

In, ‘Much Ado About Nothing, a 1993 romantic comedy film based on William Shakespeare’s play, directed by Kenneth Branagh who also starred in the film, she played Beatrice which won her great praise from the critics.

In the Merchant–Ivory 1993 film, ‘The Remains of the Day based on Kazuo Ishiguro’s novel, she starred as Miss Kenton, a housekeeper with Anthony Hopkins as Steven, a butler in interwar Britain.

Her sterling performance as the lawyer Gareth Pierce in the 1993 film, ‘In the Name of the Father, starring Daniel Day-Lewis. During the 2001 HBO film, ‘Wit’, she portrayed a Harvard professor’s struggles after being diagnosed with cervical cancer.

One of her most commercially successful films was Richard Curtis‘s romantic comedy ‘Love Actually, released in 2003. In the film, she also portrayed a middle-class wife who suspects her husband, played by Alan Rickman, of infidelity.

Moreover, she appeared in the HBO miniseries Angels in America and also voiced Queen Elinor in ‘Brave’. In the year 2013, her performance in ‘Saving Mr. Banks’ earned her great critical acclaim.
‘Effie’, which she wrote and appears in, is scheduled for release in 2014. The film is based on the true-life story of art critic John Ruskin’s affair with Effie Gray.

Emma Thompson won an Oscar Award in 1993 in the category ‘Best Actress in a Leading Role for the film ‘Howards End.

Thompson won another Oscar in the category ‘Best Writing, Screenplay Based on Material Previously Produced or Published’ for ‘Sense and Sensibility in 1996.

Likewise, she has won BAFTA Awards in the categories ‘Best Actress’ and ‘Best Performance by an Actress in a Leading Role for ‘Tutti Frutti’, ‘Fortunes of War, ‘Howards End, and ‘Sense and Sensibility.

Similarly, she won a Primetime Emmy in the category ‘Outstanding Guest Actress in a Comedy Series for ‘Ellen’ in 1998, for playing herself in the episode, ‘Emma’.

She has an estimated net worth of around $40 million (as per 2022 data) and she has earned that sum of money from her professional career.

Is Emma Thompson involved in any rumors and controversies?

There was a rumor about Thompson’s death. Currently, she is far from rumors and controversies.

What are the body measurements of Emma Thompson?

Emma’s hair color is Dark Blonde and her eye color is Blue-Green/Dark Green. Furthermore, her dress size is 6 (US) and her shoe size is 10 (US).

Emma Roberts found a New Love after her split from Garrett Hedlund! Who is her New Boyfriend?