Widely famed for his role as Lisandro in the 2016 show Lying Heart. Emmanuel Palomares is a well-recognized Venezuelan actor and model

Talking about his relationship details, Emmanuel Palomares is presently single and he is not dating anyone at the moment. The star is focused on his career and professional life.

Previously, he has dated celebrities such as Andrea Escalona in 2021 and Paola Rojas in 2019. Also, he was in a relationship with Irina Baeva. Baeva is a well-popular Russian model and actress who is known for her role as Daniela Montenegro in Las Estella’s drama titled passion & Power.

The ex-couple dated each other in 2014 and were together for 3 years. Sadly, they split up in 2017 without any unclosed reasons. 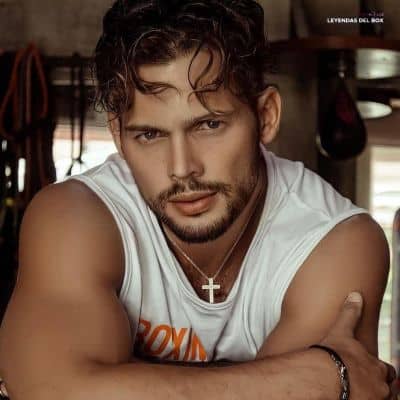 Who is Emmanuel Palomares?

Emmanuel Palomares is a well-recognized Venezuelan actor and model. Palomares is widely famed for his role as Lisandro in the 2016 show Lying Heart.

Moreover, he portrayed the role of Jose in 2016’s Dressed for Mourning and Uriel in 2017’s En tierras salvajes.

Emmanuel Palomares was born on 13 July 1990. At present, his age is 31 years old. Likewise, his birthplace is Valera, Trujillo, Venezuela.

Not much is known about his father and mother’s details, Emmanuel has not mentioned his family details. Moreover, he has not stated his sibling’s information in the public yet.

Talking about his nationality, Palomares holds a Venezuelan identity whereas his ethnicity is European.

Regarding education, the actor took classes in the school, Luz Coumba. The star then studied at CEA school of the channel of the stars, Televisa and in 2015 he completed his graduation and was named the Best Actor.

Professionally, Emmanuel started his career at age 18 in the juvenile series, Corazones Extremos broadcasted in Venevision. The actor became young protagonists of different producers of the company, participating in the international series “Escandalos(La fraternidad)” of VIP2000.

The actor then took acting classes in the school, Luz Columba with Professor Nelson Ortega. After completion of the course, he was selected in Mexico by Eugenio Cobo to enter the CEA of Televisa.

He also earned the Antagonist of the Telenovela “Nacer Contigo” transferred by Televen and became the first Venezuelan Telenovela produced in HD. The star was invited to participate in the show Mira Quien Baila(2018), remaining in third place successfully.

Some of his remarkable roles in the series are: –

A famed Venezuelan actor, Palomares has earned a decent amount of money from his profession. He has been active in his profession from the year 2010 till the present.

It is reported that Emmanuel Palomares has an estimated net worth of $1 million as of 2022.

Emmanuel has never been part of any controversial matter or rumors till now. The actor has been preoccupied with his professional and private life.

It seems that Palomares prefers enjoying his personal life and does not want to merge it with his professional life.

31 years old superstar, Emmanuel has hot shapes, a muscular body, and an adorable personality. He has not mentioned his exact height but seems to be nearly 6 feet tall.

Furthermore, Palomares has hazel eyes whereas his hair is brown.

Nevertheless, the famed star has never mentioned other physical details in the public yet.

Regarding his social media presence, Emmanuel Palomares is an active personality on social media. Emmanuel has more than 952k followers on his official Instagram account @emmanuelpalomares.

He is also active on Twitter with around 30.8k followers.

Moreover, Palomares is also available on Facebook with nearly 919k fans and supporters.