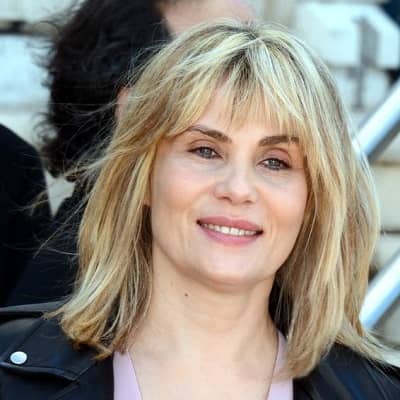 Emmanuelle Seigner is a married woman. She exchanged her vows with a director Roman Polanski on August 30, 1989, in the 16th Arrondissement of Paris. Roman is 33 years senior to Seigner.

Who is Emmanuelle Seigner?

Emmanuelle Seigner is a French singer, model, and actress. She is best known for The Ninth Gate, Frantic, and The Diving Bell and the Butterfly.

This actress was born on June 22, 1966, in Paris, France. Her father’s name is Jean-Louis, a photographer, and her mother’s name is Aline Ponelle, a journalist. Her grandfather was an actor Louis Seigner.

She has two sisters named Mathilde, and Marie-Amelie.

Emmanuelle Seigner was interested in modeling from a young age. At the age of fourteen, she began her modeling career. Earlier, Seigner made her film debut in 1984 with a movie Year of the Jellyfish directed by Christopher Frank.

The next year, she played Princess of the Bahamas in ‘Detective’. She has acted in several movies directed by her husband Roman Polanski including Frantic, Bitter Moon, The Ninth Gate, Venus in Fur, Based on a True Story, and An Officer and a Spy.

Emmanuelle got four nominations for her acting in a movie Venus in Fur, where she starred as Vanda Jourdain. Between 1990-2000, she also starred in various hit movies like Dark Illness, Le Sourire, Let’s Hope it Lasts, Nirvana, RPM, Buddy Boy, Place Vendome, and more.

Afterward, Seigner was nominated for Best Supporting Actress for the movie ‘Place Vendome’ from where she gained huge popularity. In 2001, she starred in two movies Laguna, Witches to the North.

She made her appearances in movies Corps a corps, and Os Imortais in 2003. The next year, Emmanuelle played Nathalie in Happily Ever After. She is active in Hollywood playing movies like Backstage, La Vie en rose, The Diving Bell and the Butterfly, Giallo.

Her other acting works include Change of Plans, Essential Killing, A Few Hours of Spring, In the House, The Man Who Laughs, Heal the Living, At Eternity’s Gate. Later in 2019, she played Pauline Monnier in An Officer and a Spy.

In addition to acting, Seigner is a fabulous singer. She released her first studio album ‘Ultra Orange & Emmanuelle’ with a self-titled band in 2017 produced by Sony Music. Afterward, she released her second album Dingue in 2010.

Similarly, in 2014, Emmanuelle released her solo album Distant Love. Later, in 2019, she released Diabolique in collaboration with Anton Newcombe & The Liminanas.

Earlier, this actress made her appearance in Death in Vegas’s song ‘Hands Around My Throat’. She also worked as a brand ambassador of a brand Dr. Irena Eris.

The salary of this actress is under review. Meanwhile, according to some sources, she has an estimated net worth of $10 million.

Similarly, Seigner’s husband Roman has a net worth of $50 million.

Seigner was rumored of decline to join the Academy Award calling it a curious case of amnesia. In 1978, her husband was pleaded guilty of unlawful sexual intercourse. She supported Polanski calling him a marvelous husband and man, and she understands perfectly.

Afterward, medias called that Emmanuelle was on Roman’s sex crime.

Emmanuelle Seigner is 5 feet 8 inches tall and weighs 55 kg. Similarly, she has blonde hair and green eyes. Her body measurement is 36-25-36 inches.