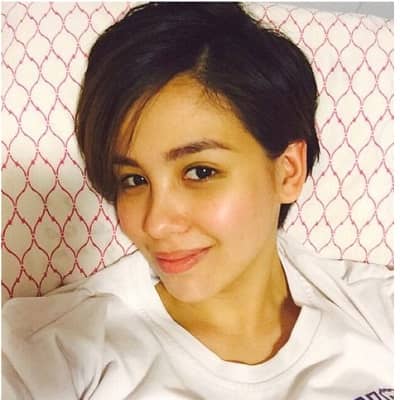 'Never be Afraid to do What is Right'.

Empress Schuck is engaged to her longtime boyfriend Vino Guingona on 27 September 2020.

Vino and Empress started dating in 2014. This couple together has a daughter Athalia Guingona born on 27 September 2020.

According to her Instagram post, Vino proposed her on the 5th birthday of their daughter and they got engaged then.

Who is Empress Schuck?

Empress Schuck is a Filipino actress, model, and dancer. She is best known as a Young Cassiopeia in the television series Etheria.

This actress was born on 19 February 1993, in Quezon City, Phillippines, with a birth name Empress Karen Carreon Schuck. She belongs to Asian-German descent.

Her father‘s name is Hans Schuck, and her mother‘s name is Gina Schuck. She has three brothers Justen, Hans Erard, Kim Vong Matthew, and a sister named Princess.

In 1999, she started her professional career as a model in Vaseline shampoo. The next year, she became engaged with ABS-CBN at the age of 8.

Afterward, she made her appearances in many series like Muting Anghel, Ang Libigin Ay Ikaw, Etheria, Super Inggo. From 2006-2014, Schuck was a performer and a host of variety show ASAP.

Her other works on television include Maalaala Mo Kaya, Your Song Presents Underage, Pare Koy, Goals & Girls, PO5, Shoutout, My Love from the Star, The Better Woman, Trops. Recently in 2020, she Bawal Na Game Show.

In addition to television, she is also active in movies. Empress made her film debut as Sandy del Rosario in 9 Mornings in 2002. After a gap of four years, she starred in Pacquiao: The Movie, and ‘Shake, Rattle, & Roll B’.

The next year, she played Nina in ‘Angels’ and played Gila in ‘Resiklo’. Afterward, Empress appeared in other films like Hilot, BFF, Working Girls, I’ll Be There, Rosario, Amorosa, Guni-Guni. Her other work on movies includes Tuhog, Beauty in a Bottle, Throwback Today, Goyo: Ang Batang Heneral, and Kahit Ayaw Mo Na.

Earlier in 2013, Empress starred in Sam Concepcion’s music video Mahal na Mahal. She is the winner of the 2003 FAMAS Awards as Best Child Actress for her debut film 9 Mornings.

Empress Schuck: Salary and Net Worth

The average salary of an actress in the Philippines is 184K Philipino Peso. Meanwhile, according to some sources, Empress has an average net worth of $1 million.

There was a rumor that Schuck is in a live-in relationship with her showbiz partner. In 2019, she admitted the rumor that she is living with her longtime boyfriend Vino Guingona.

Earlier, in 2011, there was a rumor that she was dating her co-star Enchong Dee. Later, Empress denied the rumor.

Similarly, she also has her own YouTube channel with around 6.2 K subscribers.

Danielle Fogarty is engaged to her Ex on the Beach boyfriend Ross Worswick!