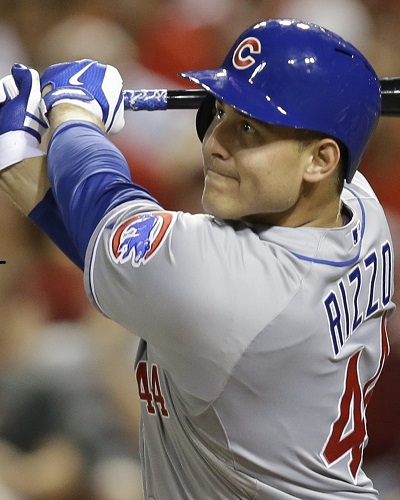 Then after Rizzo looked happier. Anthony Rizzo has proposed to his fiance with the engagement ring and now are finally engaged.

Scroll to know more about their engagement.

The first basemen published his engagement to his girlfriend Emily Vakos on Thursday night after his romantic proposal.

The MLB player took his lady on a boat trip on Lake Michigan. After that, he jumped a question which was supported by a fireworks display.

Again, the World Series champion shared the same photo on Instagram along with two other pictures and said that

According to Chicago Sun-Times Rizzo told:

“It was great,”. “She was totally surprised. That’s what I wanted. Somehow kept that under wraps.”

The newly engaged couple has not opened up a wedding date but Rizzo is released he didn’t miss the ring before proposing.

“It’s something in life that you want to find someone to spend the rest of your life with,”. “I’m lucky enough to have that.”

“Congrats to these two,” with an emoji of a diamond ring.

“Welcome to the family Emily!”

Followingly, Anthony Rizzo was asked when he was going to marry his girlfriend, Emily Vakos. In the offseason, the two couples had traveled to Thailand.

When Vakos stood behind him with a smile, nodding in agreement then Rizzo said:

Before he would pop the question  Rizzo knew that Vakos was his “soulmate,”. He had to choose the right time and do it the right way. Rizzo planned that when the moment finally arrived on Thursday night on the Cubs’ off-day.

“We were on a boat on Lake Michigan, had some fireworks go off and it was great,”. “She was totally surprised, so that’s one I somehow kept under wraps.”

Moreover, former Cub Dexter Fowler send a text to Rizzo and reminded him he was after in town again. Then after Rizzo said:

“He asked me if that’s why the fireworks went off last night,.

Fowler told me it was not a joke. According to Fowler,

“It’s funny. I was in my (hotel) room, I heard the fireworks going off,”. “I was like, ‘It’s kinda early for fireworks.’ I texted ‘Rizz’ and he told me he proposed.

When news extended out Rizzo received hundreds of congratulatory messages and thousands of likes on his social media. When someone asked Rizzo and he replied:

“Do I have a date?”. “Yeah, it’s June 2nd. No, not yet. Who knows? The excitement is still there. We haven’t talked about that really.”

Rizzo was asked about the Cubs’ 0-6 road excursion and current slip heading into the Cardinals series after talking about his engagement.

“Everything is not going to be perfect,”.

Anthony Rizzo is an American professional baseball player. He currently plays as a first baseman for the Chicago Cubs of Major League Baseball (MLB). He was selected by the Boston Red Sox in the sixth round of the 2007 MLB draft and became a top minor league prospect in the Red Sox organization. See more bio…