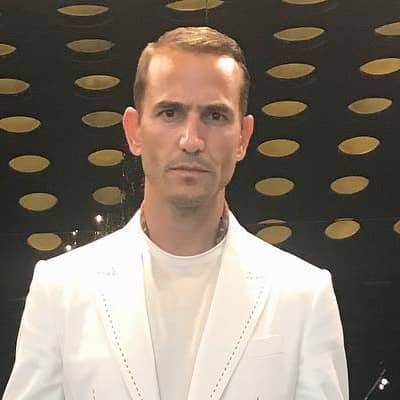 What is the relationship of Enrique Palacios?

Enrique Palacios is a married man and a father of two children. He gets married to Veronica Schneider who is an actress and model by profession. Veronica competed in the Miss Venezuela 1998 pageant where she holds the title of the pageant.

The couple together is blessed parents of two children a son and a daughter. In 2008, they welcomed their first child a daughter named Sarah Palacios, and their son named David Palacios was born in 2013.

In back 2001, he has been in a relationship with Naomi Campbell who is also a model by profession.

Who is Enrique Palacios?

Enrique Palacios is a Venezuelan fashion model who is best known for his fragrance campaign for Armani, Tommy Hilfiger, and Dolce & Gabbana. Palacios is better known as the ex-boyfriend of the British supermodel, Naomi Campbell.

The model was born on May 22, 1975, in Caracas, Venezuela. At present, he is 46 years old and his star sign is Gemini. He holds Venezuelan nationality whereas his ethnicity is unknown.

Palacios hasn’t yet disclosed his parent’s and siblings’ identities in the media. It seems he prefers to keep a lowkey profile regarding his personal life. Also, his academic details are under the curtains at the moment.

Enrique started his modeling career in the year 1995, shortly after an agent from Karin Models France approached him for modeling in France.

Later, he appeared in a fragrance campaign for Armani Code, a luxury fashion house founded by Giorgio Armani which designs, manufactures, distributes, and retails.

Similarly, he worked in other campaigns like Tommy Hilfiger and Dolce & Gabbana. In 2005, Palacios features in an article cover of L’Uomo Vogue along with Gabriel Aubry, Jason Shaw, Alex Lundqvist, and Mark Vanderloo, photographed by Chinese-born New York photographer, Walter Chin.

To date, Palacios has been able to maintain his clean profile. He hasn’t been involved in any sorts of rumors and disputes that create headlines in the media.

Palacios might have accumulated a fair amount of fortune throughout his profession as a model. But, he hasn’t yet revealed his exact figure of net worth, salary, and yearly income in the media.

The model has an impressive height of 6 feet 1 inch tall with an average weight. However, his actual measurement of weight is not available. He wears 43 (France) shoe sizes. Likewise, he has a dark brown hair color and a dark brown pair of eyes.