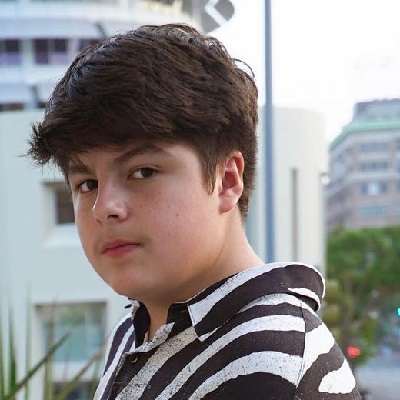 Enzo Lopez’s current relationship status is possibly single. To date, he has not introduced anybody as his girlfriend or lover.

His Instagram post suggests that he has a soft corner for dogs. Also, he has a pet dog named, Maui.

Who is Enzo Lopez?

American Enzo Lopez is a social media star and actor. He is renowned for his Instagram and TikTok video that went viral on the web.

In 2020, he made his acting debut with the series, Chicken Girls.

Enzo Lopez was born on 16th November 2007 in Louisiana, United States. He is of Spanish ethnicity.

He happens to the son of Sheri Easterling and Monty Lopez. His mother, Sheri, and father, Monty are professional TikTok Stars. Previously, Sheri was an engineer whereas Monty was engaged in several managerial positions.

Moving towards his academics, he is attending the Calvary Baptist Academy. However, he has not disclosed any details regarding his current grade. Possibly, he is at the middle school.

Initially, he made his limelight as the younger brother of the TikTok Star, Addison Rae. Later, he started making his appearance in Addison’s TikTok videos. Within the time interval of a month, he went popular through such videos.

Later, he started making such videos on his own TikTok account. Currently, his TikTok account has 2.1k followers with 6.3k likes. As per his bio on the TikTok account, he has 1.4 million followers on his previous account that got banned.

Apart from being a TikTok, he is also an actor. In 2020, he entered into the TV industry with the 7th season of the TV series, Chicken Girls. In the series, In series, he portrayed the character of Peyton “PK” Kaye, cousin of Birdie Kaye (aka. Mads Lewis).

Besides that, he signed with WME agency in January along with his family. Also, he currently runs a YouTube channel with the name, Livin the Lopez Life with 213k subscribers with 5.3 million views.

Enzo Lopez has brown eyes with brunette hair. He stands at a height of 5 feet 2 inches and weighs around 60 kg.

He is active on Instagram with the handle, 365k followers.