Eric Bolling is a 2020 Emmy nominated TV personality, author. He is a pro-Donald Trump supporter. Eric is married to Adrienne Bolling. 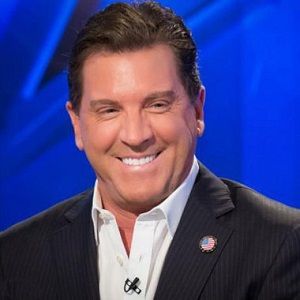 And yet when you take Christianity, Judaism, Hinduism, Buddhism, whatever, their combined killings in the name of religion -- well, that would be zero.

I think that there's an important point to make if you're running for president, which is that you tell the American people how you would handle a crisis. She [Hillary Clinton] is saying here's what I would do in terms of air power, in terms of dealing with the enemy. Donald Trump never says a word. He just says, "I've got a secret plan." He impugns the president .

I'd never want to have a gun. I don't think we need guns in this country and I hate it, and I think the NRA is a disaster area.

Eric Bolling is a married man. His wife is Adrienne Bolling and he is married since October 4, 1997. The couple together has one child, Eric Chase(son).

In September 2017, Eric and Adrienne lost their son Eric. He was found dead in Boulder, Colorado where he was studying at the University of Colorado. He was just 19 years old at the time of death. The cause of his death is an accidental overdose.

Who is Eric Bolling?

Eric Bolling is a conservative American TV personality and author. He specializes particularly in financial news and political commentary.

Bolling is the co-host of Fox News Channel’s talk show The Five and the host of the Fox Business Channel news program Cashin’ In.

In 2016, he published his first literary work Wake Up America, a New York Times bestseller, followed by The Swamp: Washington’s Murky Pool of Corruption and Cronyism and How Trump Can Drain It in 2017.

His parents are Marie Hildegarde (Catino) and John Gustav Bolling. While much is unknown about his siblings, one of his sisters died due to cancer.

His father is Swedish and his mother is Italian so he is of mixed ethnicity. He is American by nationality.

Except for the fact that he grew up in a poor family in Chicago, there is no much information regarding the childhood life of Bolling.

As per his education, Bolling attended the ‘Queen of All Saints Basilica’ school and later went to Loyola Academy for his high school education.

He then enrolled at Rollins College, graduating in 1984 with a bachelor’s degree in economics. Eric eventually received a fellowship at the School of Public Policy at Duke University.

The Pittsburgh Pirates drafted Bolling in the 22nd round of the 1984 Major League Baseball Draft and assigned him to their affiliate in the rookie-level Gulf Coast League.

However, his baseball career was cut short by a torn rotator cuff injury.

Bolling began his career as a commodities trader on the New York Mercantile Exchange, where he specialized in trading natural gas, crude oil, gold, and other commodities.

Bolling was involved in developing CNBC’s Fast Money. After leaving CNBC in August 2007, he moved to the Fox Business Network as one of the financial analysts. There, he hosted the business show Happy Hour.

Then he went on to also criticize Obama for allowing rapper Common to appear in the White House a few weeks before. Progressive group Media Matters criticized him.

Bolling serves as a host of The Five on the Fox News Channel. He also serves as a guest host on many Fox News shows such as The O’Reilly Factor, Hannity, Fox & Friends, The Glenn Beck Show.

Eric has also penned few books like ‘Wake up America’, and ‘The Swamp: Washington’s Murky Pool of Corruption and Cronyism and How Trump Can Drain It‘.

Bolling gets an annual salary of about $10 million and his net worth is around $15 million.

Eric has been drawn into controversy now and often. In an on-air incident in June 2011, Bolling mocked the then US President Barack Obama’s decision to meet with Gabon’s President Ali Bongo Ondimba in the White House.

Then he went on to also criticize Obama for allowing rapper Common to appear in the White House a few weeks before.

Bolling also was dragged into a sexual harassment case in August 2017.

Talking about Eric’s body measurement, his height is 6 feet 1 inch, and weighs 75 kg. His hair color is brown and he has greenish eyes. There is also no information about his shoe size and dress size.