Eric Decker is an American football player who has played for New York Jets, Tennessee Titans. Eric is married to Jessie since 2013 and has three kids. 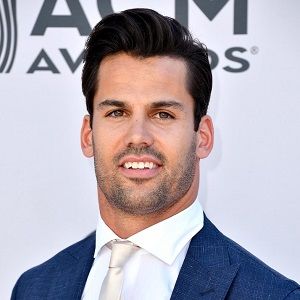 I feel I give enough out and if I'm not sharing something, then that's just something I choose to be personal about

There was no convincing Eric to do the video, because the alternative was having some other guy all over me in a music video, he’s great in the entertainment world and he’s so gorgeous and comfortable in front of the camera, it’s nothing for him.

Eric Decker is a married man, he tied the knot with a country singer Jessie James on 2013 June 22. Furthermore, the beautiful couple has been dating from 2011 and married after being in a relationship for a couple of years.

As a married couple, they have also welcomed three children a daughter named Vivianne Rose Decker in 2014, a son named Eric Thomas Decker II in 2015, and Forrest Decker in March 2018.

Apart from Jessie, Eric has not seen anyone and there was not any rumor of extramarital affair and girlfriend. Since their marriage, they have been enjoying their married life and living happily.

Who is Eric Decker?

Eric Decker is an American football player. Currently, he plays for the Tennessee Titans of the National Football League as a wide receiver.

Previously, he has played with New York Jets and Denver Broncos. Furthermore, he was AFC champion and has also received the AFC Offensive Player of the Week award.

Eric was born on March 15, 1987, in Cold Spring, Minnesota, the United States to German ancestry.

He is the son of Sue Meyer and Tom Decker. From the beginning of his childhood, he had a keen interest in sports and he began to play football and baseball from his school days.

During his early days, he was an extraordinary talent as he received all-conference, all-area, and all-section honors.

At his school days, he has played three sports baseball, football, and basketball. During his early days, he was an extraordinary talent as he received all-conference, all-area, and all-section honors as well named football team MVP two years in a row.

Later, he enrolled at the University of Minnesota.

Eric began his professional football career with Denver Broncos after being drafted in the third round of the 2010 NFL Draft. In the first season, he had a foot injury and couldn’t continue his game. However, he signed a 4-year contract with Denver Broncos.

Furthermore, he finished the season with 6 catches that went for 106 yards and one touchdown. In the starting match of 2011 season, Eric obtained 5 passes for 113 yards and 2 touchdowns in which Denver registered their first victory of the 2011 season.

Moreover, he again received an injury in the first round of the playoffs against the Pittsburgh Steelers.

During his 2012 season, the Denver footballer played brilliantly and had 85 catches for 1,064 yards and 13 touchdowns. Besides this,  8 catches for 174 yards and team record-tying 4 touchdowns against the Kansas City Chiefs.

For his performance, Eric also received the AFC Offensive Player of the Week award. On March 12, 2014, he switched to New York Jets in a five-year deal worth $36.25 million. In the match against Miami Dolphins, Eric played his best match with 10 receptions, 221 yards, and one touchdown.

During the 2015 season, Eric caught 80 passes for 1,027 yards and 12 touchdowns. The 2016 season came as his worst season as he got injured and also fined for a late hit he made on Josh Shaw. On June 18, 2017, Eric moved to Tennessee Titans on a one-year contract with them.

As of now, he has also received several awards in his professional career. He has received an award for the AFC Offensive Player of the Week. he was also the AFC champion in the season of 2013.

Being a professional football player, Eric bags a massive amount of money from his profession. Currently, he earns $5 million as an annual salary and has a net worth of $10 million.

So far, there are not any drastic rumors regarding his personal and professional life. Furthermore, he has never faced any controversy yet. It seems he is doing his job in its best way and never stuck in any trouble.

Tall and dashing Eric Decker has a towering height of 6 feet 3 inches and weighs 99 kg. Furthermore, he has beautiful light brown eyes and black hair. There is no information about his shoe size and dress size.

Eric Decker is hugely active on social media such as Facebook, Twitter, and Instagram. Furthermore, he regularly keeps posting updates, photos, and videos on his social accounts.