Who is the wife of Eric L. Trump?

Reflecting on his personal life, Eric Frederick Trump is a married man.

He shared marital vows with Lara Trump on the 8th of November 2014. His wife is a former TV producer and adviser.

Prior to the wedding, they dated each other for around 6 years. The wedding took place at Donald’s Mar-a-Lago estate in Palm Beach, Florida.

The lavish ceremony was attended by the entire Trump family. Also, Donald Trump Jr. served as the best man at the event. Whereas Ivanka Trump was a bridesmaid and Arabella Rose Kushner served as the flower maid. The ceremony was officiated by Jared Kushner.

At the wedding event, she wore two Vera Wang gowns; one for the wedding ceremony and another for the reception. The jewelry she carried at the events was from Ivanka’s line.

Together, Lara and Eric are blessed with two children including a son, Eric Luke Trump (born 2017), and a daughter, Carolina Dorothy Trump (born: 2019). 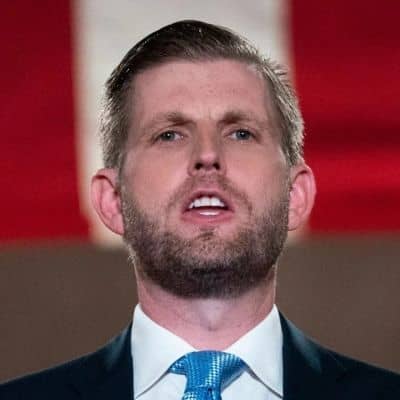 Who is Eric Frederick Trump?

Eric Frederick Trump is a popular American activist, businessman, and ex-reality television presenter. He is best known to be the third child, and second son of Donald Trump, along with his first wife, Ivana Trump.

The American businessman was born on January 6, 1984, in New York City, the United States. As of 2022, he is 38 years old holding an American nationality. Similarly, his ethnicity is Caucasian and according to astrologers, his birth zodiac sign is Capricorn.

His father, Donald J. Trump worked as a front-runner of the republication in 2016 US the presidential election and real estate developer.

On the other hand, his mother, Ivana Trump was a businesswoman, fashion designer, author, model, and media personality. On 14th July 2022, she passed away at the age of 73, in her home which is in New York City. The reason behind her death is suspected to be cardiac arrest, but the official cause of her death has not been determined yet.

He has got younger siblings Ivanka, and Donald Trump Jr. Also, he has got two sisters and a brother from his stepmother Tiffany and Barron.

Talking about his educational life, he completed his schooling at the Hill School. Later, he graduated from Georgetown University with a degree in finance and management.

Talking about his professional life, he worked as the vice president for the Trump Organization along with his sister, Ivanka Trump.

He founded the Eric Trump Foundation in 2007. The foundation was established with the motive to raise money for St. Jude Children’s Research Hospital based in Tennessee.

The foundation claimed that they would raise $20 million within ten years for the Eric Trump Foundation Surgery & ICU Center in the Kay Research and a $198 million tower, Care Center on February 19, 2015.

On December 31, 2016, Eric stated that he would stop fundraising.

Then in Donald Trump, his father’s 2016 presidential campaign, he was an active key advisor, campaign surrogate, and fundraiser.

On the other hand, he has been the promoter of several conspiracy theories.

Eric Frederick Trump has a net worth of about $130 Million USD according to the sources. Currently, he is living a lifestyle and is also able to provide the same lifestyle to his parents as well.

As per some sources, along with his siblings, Ivanka and Donald, he is earning about $35 million monthly.

The handsome business always stays in the limelight due to his as well as his parent’s fame. Eric has not been part of any serious rumors and controversies which might hamper his professional career.

In the Trump family, Eric is the tallest member standing at the height of 6 feet 5 inches, and weighs around 88 Kg. Similarly, his body measurements like chest, waist, and hips size have not been updated yet.

Moving on to his physical appearance, he has a fair complexion, along with a pair of blue eyes and blonde hair.

Adding up more, there is a Facebook page under his name, which is enriched with over 915K followers.